I've been trying to get down to the beach communities at least a little bit more frequently as of late, especially early in the morning while the June Gloom is making everything seem sleepy and peaceful. I visited the Olive Cafe in Mission Beach on the recommendation of a friend who was only vaguely able to describe where it was. We eventually pinpointed it on Google by using street view. It's on the corner of Mission and Santa Clara, tucked off the main street just a little bit. There are probably more seats on the patio than there are inside, but the interior is super cozy. It felt like a little cottage somewhere with a somewhat grandmotherly flair. Still, the Mission Beach vibe peeked through with the occasional picture of a surfer girl on the walls. 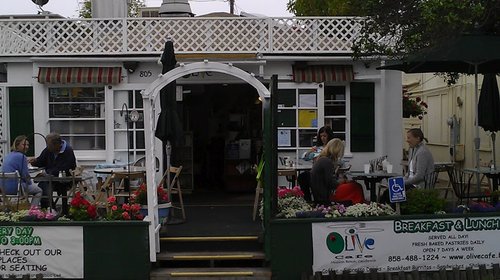 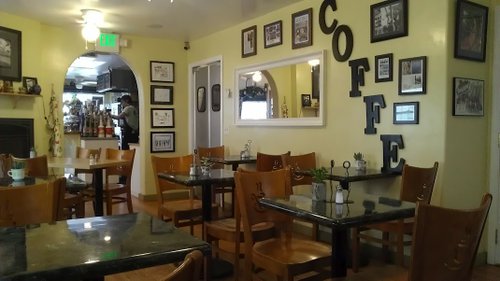 A large coffee is $1.85 and espresso drinks start at $2.25, which actually puts the coffee on the cheaper side of the average. I paid $1.75 for a cup of hot tea. The breakfast menu ran beyond the coffee shop norm, a quality I've been looking for lately. I could have taken my pick from a bevy of scrambles and breakfast burritos, but the addition of half a dozen kinds of pancakes, some french toast, and plenty of fresh fruit bowls made the choice a little more involved. I appreciate being able to eat something other than the same old breakfast sandwich.

I ended up going for a stack of banana walnut pancakes, which came in on the cheaper side of breakfast just like the coffee. $5.75 got me two, very large pancakes topped with fruit and nuts. I could have stood for a few more walnuts and sliced bananas, and the syrup was artificial rather than real maple, but I had few complaints overall. 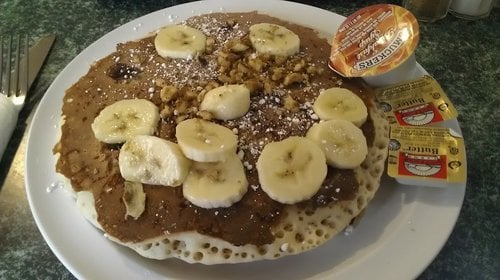 I had trouble getting on the internet in the Olive Cafe. Neither my phone nor my Chromebook could access their network, and that could be problematic for writers and students, but fingers are crossed that it's a short term problem.

Another weird thing that happened was the following: as soon as I sat down inside, a girl came in, sat down at another table, and promptly pulled out a glossy copy of the Bible. This isn't something you see everyday on the beach, as far as I know. Then, when I relocated to the patio to finish my tea in the fresh air, a group of girls was actively engaged in talking about prayer, Jesus, and other Christian subjects next to me.

Now, this is probably just a coincidence, but you never know, maybe it's the Christian hangout. Would Jesus feel good about reasonably priced pancakes? I should certainly hope.

The Olive Cafe is located at 805 Santa Clara Place and serves breakfast and lunch from 7:30-3:00 every day.

Edit: the issue of internet connectivity may just be attributable to my Chromebook. Turns out it has a few idiosyncrasies that I'm still sorting out!

I absolutely LOVE Olive Cafe!!! You might say it's my 2nd home. Next time you should add chocolate chips to the banana walnut pancakes! (I also get them with a side of whip cream because syrup isn't my thing). Try it! It's delicious!

I would have thought seeing multiple bibles was a little strange if I didn't live down the street from Olive. It's not that Olive is the Christian hang out... it's that a Bible Camp rents from the Santa Clara Motel and the beach house across the street for their Bible Camp every summer. As far as I know, none of the campers have cars (maybe just the counselors?) so they frequent the places they can walk to daily. The internet is sometimes slow to connect, but it usually works! ~Pam

Ah ha! Thanks for wrapping up the issue of the unexpected presence of a Christian majority during breakfast hours :D

I too, love Olive Cafe! I have been there many times! With it's warm, inviting aromas of baking scones and the welcoming smiles of the owner and employees, ALL are welcome. There is no better place by the beach to spend time enjoying wonderful food. :-D