We’re sitting in the back of the 901 bus, Friday night around five, heading south.

This lady with a stack of yellow plastic bags starts telling her neighbor what a bunch of bargains she’s picked up.

“It tell you these people really are cheap cheap, cheap! Look at this.”

Name's Sharon. She hauls out a bag of shrimp.

“Two pounds, headed and veined, and $10.99. You’d pay fifteen, sixteen bucks elsewhere. And look at this.” 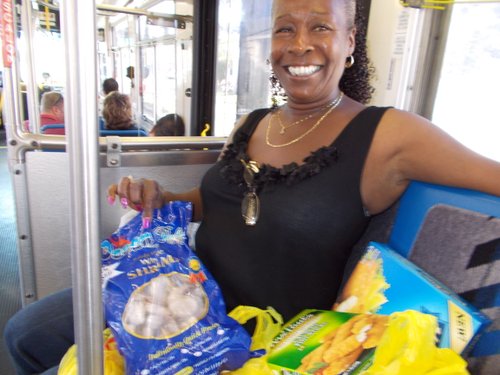 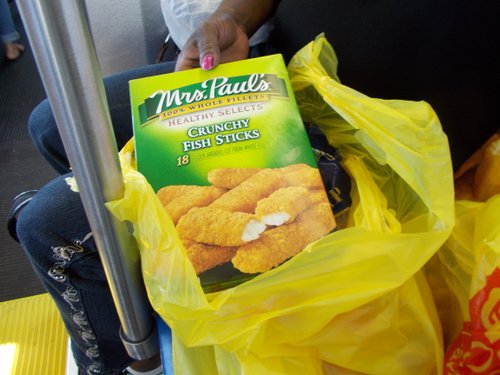 “Dollar ninety-nine! And they’re whole fillets, not shredded and stuck together. And see this: Chewy Bars. Quaker! $1.99. Only other place you’ll find prices like these is the 99-cent store in IB. I’m telling you: downtown needs this.”

Turns out Grocery Outlet is a chain of “extreme-value” retail stores that has been going since the 40s, right after the Second War. That’s when this guy named Jim Read started buying military surplus and selling it at big discounts.

Soon, Jim started moving in to groceries. Ever since, the company (his grandkids run it now) basically has prospered by buying product overruns, when food and beverage makers churn out too much of a food item and need to offload it. Quick, while it’s fresh. They say some of the biggest bargains are in wine.

Of course that means you might be getting a whole lot of stuff other people don't want, but they have all the standard items too, at more conventional prices.

Whatever, today, Grocery Outlet claims to be the country’s largest “extreme value” chain. They have over 150 stores in six western states and say they sell brand-name products at 40-60 percent below mainstream retailers.

I’m Googling all this as we head over the bridge. Some language students from overseas look on, bemused.

By now, Sharon, who works at a technical school downtown, has got the whole back of the bus pretty excited.

“I’m not mean, but I’m a pretty mean bargain hunter. Heck these days you have to be!”