All hail the waffle king!

I had no idea. How could I have known? I just saw the little pictogram of an anthropomorphic waffle king on the sign for the King’s Inn and that was enough to pique my interest. 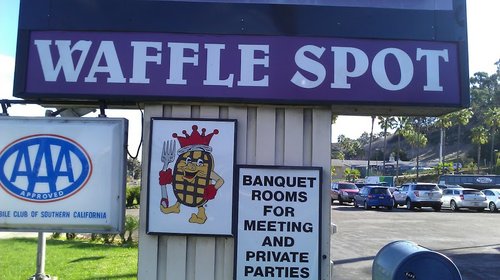 In the lobby, where a statue of the waffle potentate guards the entrance to the smallish diner, I fell into instantaneous love with the sincere and quirky awesomeness of the Waffle Spot. It was like stepping into another world, and I don’t say that because the restaurant walls are painted with scenes from a breakfast kingdom where characters like Sir Robin of Flapjack and the Court Eggster make merry beneath the rule of the benevolent monarch Sir Wafflelot. The experience was otherworldly because the Waffle Spot felt so far away from normal, yet strangely comfortable at the same time. 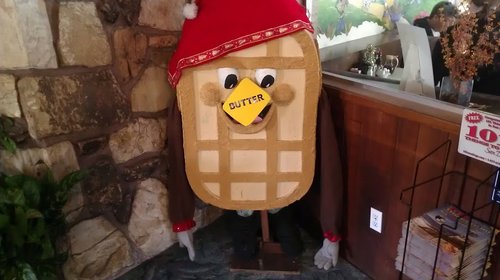 Crayon-powered fan art lined the walls, some of it pretty amazing. Characters from the breakfast kingdom had been decorated to look like players from movies and TV. Waffle Batman and egg Joker, anyone? 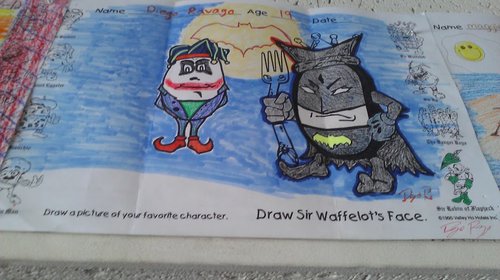 By the time the life-sized Sir Wafflelot mascot paraded through the dining room, I was giggling like a Glee cast member and hi-fiving the giant foam waffle man. Yes, I did eventually have my picture taken with "his majesty."

I kid you not. This is the breakfast experience I had the morning I saw The Hobbit.

And, hey, the breakfast was both cheap and tasty! Waffle plates start under $5 and my bacon waffle ($8.25) was studded with chewy bits of bacon and served alongside two scrambled eggs and a cup of fruit salad. Neither too crispy nor too soggy, the waffle was generous in size and scrumptious in flavor.

Likewise, a chocolate chip waffle ($6.75) had been riddled with chips, white and dark chocolate both, melted under the heat of the waffle iron. 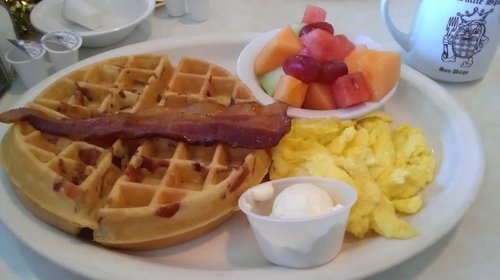 Enterprising souls might try waffle eggs benedict,or the self-explanatory “waffles rancheros,” both of which come served on miniature waffles the size of English muffins. Those mini waffles, incidentally, are available for children.

There were other breakfast foods on the menu, omelets, sandwiches, cereals, etc. But I think there’s some royal edict in the kingdom of Wafflonia about eating too many non-waffle breakfasts, so tread with care.