I Went to the Airport…to Eat!

In the past, airports were hardly the place one would consider going to for a good meal. Times change and airports are looking to reinvent themselves as a destination outside of travel with art exhibitions, shopping, and high-end dining experiences. So today, I stopped by The Landings at Carlsbad, located at McClellan-Palomar Airport, to try out their lunch menu.

After an initial misstep with parking (it’s the second lot on the right, not the first), I made my way into the restaurant. Despite an almost full house, the noise level was low as I chose a table near a window. Patio seating is also available. Christmas carols played softly in the background as four televisions projected muted golf and football.

Lunch, served from 11-5, offers a selection of sandwiches and wraps, burgers, fish tacos, and a tuna plate. Other than a side salad offered with the soup of the day or chili, there are no additional salad options. I asked if their veggie burgers are made in-house; they aren't. Okay. Continuing to look the menu over, one of the burgers caught my eye: “Incredible Peanut Butter Burger!!!” ($11) Three exclamation points really stand out on a menu, as does the word “Incredible”, so I took the subtle marketing clues and ordered it. Unable to decide between the coleslaw and the sweet potato fries for my side, the server offered to bring me a sample of the coleslaw. Though a tasty, classic version and made in the restaurant, I chose the fries. 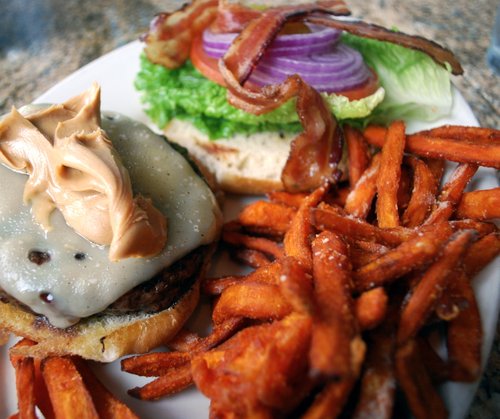 While enjoying the wall of windows, looking out over the runway and a couple of hangars, my meal was served. Open-faced, the 1/2 lb. Angus burger came with bacon, Swiss cheese, red onions, pickles, lettuce, tomatoes, and a mound of creamy peanut butter. My initial reaction was that there was too much peanut butter, but I left it on to experience the burger the way the chef intended. I did request a few more pickles to supplement the two tiny ones I received on this massive burger. After I put it together, I had no idea how I was going to be able to eat it; it was huge! Vacillating between my attempts at lady-like and sexy babe in that hamburger commercial bites, I managed to eat. It was very good. The flavors combined well with the peanut butter coming through for an occasional surprise. 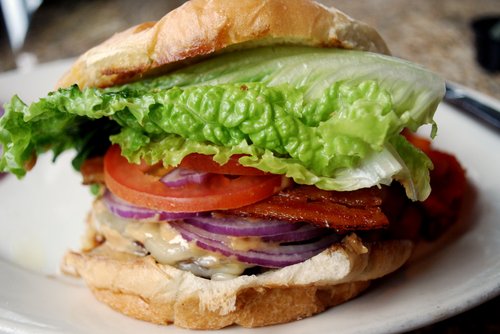 Was it worth three exclamation points? Maybe one and a half, and I would call it "Intriguing". Would I order it again? Probably…unless they add bigger salads to the menu.

I've wanted to go there ever since it open but assumed it was a grab-a-bite before we get to La Costa type restaurant. Now that I know they offer a lunch menu, I'll go. I really miss the old burger joint that was above a hanger before they remodeled the airport. You could almost see every part of the runway, planes landing and taking off. My kids loved it better than McDonalds. I think planners really missed a great opportunity not putting the new eatery on a 2nd level.