This Hillcrest taco shop is open 24 hours and takes only cash (there's an ATM on site). The prices are cheap and the clientele often borders on sketchy. It's La Posta.

I usually err on the side of caution in taking recommendations from people I know, but I found the person trustworthy who informed me that La Posta had "the best bean and cheese burrito." Obviously, that's going to be a wickedly contentious statement and I don't intend to start any kind of taco turf war over the relative merits of XYZ Taco Shop's bean 'n' cheese burrito vs. the one I had at La Posta. I will say that it was, as promised, excellent.

The fact is, it's all about the beans. Every time I've been to La Posta, the refried beans have been among the most flavorful I've had the chance to eat for very little money. Part of that had to do with the texture. Neither gummy nor watery, the beans inside my burrito had just the right consistency. I've paid less than La Posta's price of $2.79, but not for anything that tasted even half as good.

On a different visit, a mixed burrito ($2.79) had the same exceptional beans, but also included a hodgepodge of meat, peppers, and onions that seemed to be more of a topping for the beans. A pork taco, also $2.79, was generous for a taco, though smaller than the burrito at the same price. There was plenty of adobada-style pork inside and not much beyond a few token vegetables to interfere with the porky. 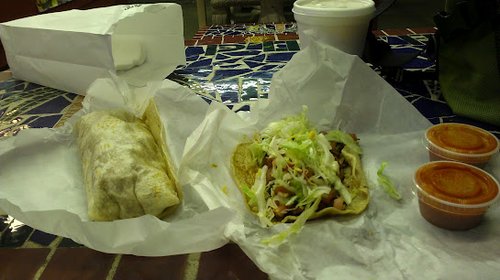 La Posta has a definite degree of seedy charm and a bottom-line pricing strategy to match. Anything on the menu that includes the worthy beans is a safe bet, especially if it happens to be 3:49 in the morning, although maybe at that point it's time to order something off the breakfast menu that's served from 2-11 AM.