Untruth in Labeling: The Problem of "Uncured" Meats

Over the past couple of years, a variety of meats (and some variety meats, but that's quite a different tale) have started turning up in grocery and specialty stores with the qualifier "uncured" attached to the packaging. This is a problematic designation when the product in question is bacon, ham, salami, or any other kind of traditionally cured meat.

I just examined a package of Trader Joe's Uncured Pastrami that I found next to the other deli meats in my local branch of that store. 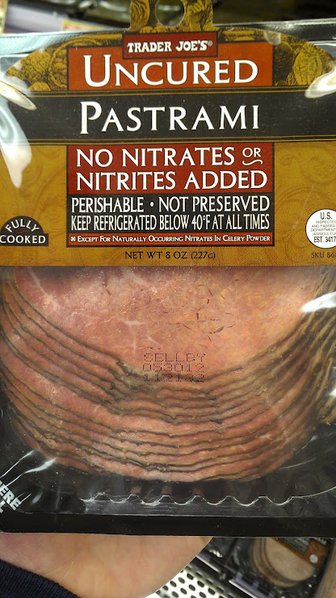 It's clear that the manufacturers are using the "uncured" moniker to indicate that the pastrami was made without the addition of sodium nitrate (saltpeter) or sodium nitrite (pink salt). Both compounds, which are widely used in commercial meat curing, have gotten something of a bad rap lately for having some potentially nasty side effects. The two chemicals both function to preserve meat during curing and, perhaps more importantly, to give it a pink coloration that's been deemed more desirable by consumers than the flat hue of meats cured in other fashions.

The big problem with the "uncured" label, for me and for all of gastronomy, comes from flipping over the package of pastrami and reading the ingredients. 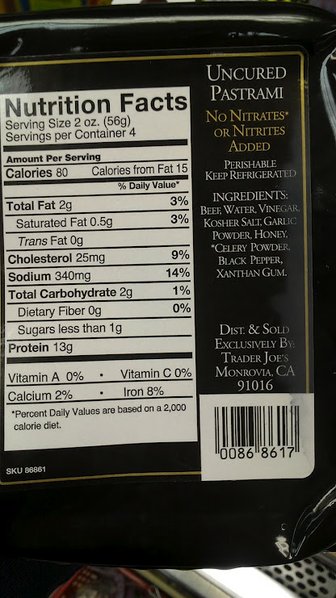 The back of the package listed vinegar, kosher salt, honey, celery powder, and water among the ingredients of the pastrami. That little list of ingredients makes up everything that goes into a cure.

Curing, at it's very root, is the preservation of meat by the use of acid, salt, and sugar to remove water and prevent spoilage. The flavor and texture that develops during the process is an added bonus and, in the era of modern refrigeration, the real point to curing anything to begin with. That Trader Joe's pastrami, despite it's lack of sodium nitrate and nitrite, had most certainly been cured.

A cure can be as simple as the salt, sugar, and spice mixture within which duck confit is ensconced for 1-3 days before it's cooked. That's right, duck confit is a cured meat, though it's almost never labelled as such. "Confit" is French for "preserved," after all.

Another complication in this labeling is that the celery powder that's an ingredient in most "uncured" cured meats actually generates nitrates during the curing process. It doesn't have the dramatic pinking effect of high-doses of nitrate and nitrite added to the cure in powdered form because the end result is much lower in concentration.

The debate over sodium nitrate and nitrite isn't the point here, however, and debating the subtleties of chemical additives is an entirely separate matter.

What I'm trying to elaborate upon is that it's highly disingenuous for companies to be labeling products inaccurately in an effort to cash in on public concerns over the health effects of certain chemicals, regardless of the validity or falsity of those same concerns. Contemporary food culture has developed a sense of hyper-sensitivity towards the stories that surround the food we eat. Everything from the provenance of the ingredients themselves to the environment in which they are eventually consumed is taken into account when the overall quality and value of food is being determined. When our food is packaged in a way that's deliberately misleading, it casts suspicion over the entire chain of supply. Calling a package of pastrami "uncured" may be mostly harmless, but it's only right that we should expect the things we put into our bodies to not be marked with deception.