It was hard to get really psyched about a quasi-Irish chain, even one that's closely managed and restricted to a less than imperial number of locations. But, every now and again, a place will deliver a pleasant surprise.

Stopping in for dinner at Hennessey's in La Jolla, I found the architecture and warm fire pits to be inviting as the sun started to sink below the horizon. 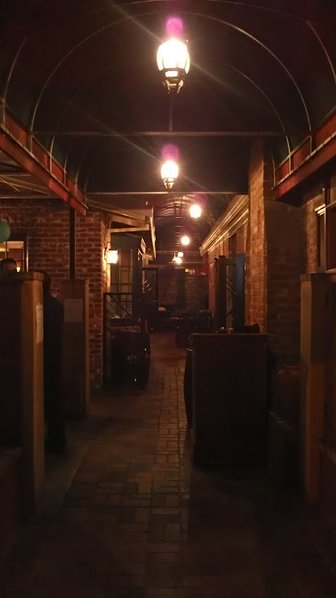 The interior ultimately had a somewhat cheaper feel than the entryway and fire pits promised, but it was still very comfortable. Thankfully, every surface hasn't been plastered with shamrocks and new age Celtic designs; a practice which generates mostly eyesores six thousand miles from Ireland.

Beer was a little on the pricey side, a 22 oz Fat Tire ran to almost nine dollars and a can of Boddington's Pub Ale (a better-than-average session beer) cost $6, which is almost three times the cost of that beer at a market. Still, the beer list was respectable (though not great) and the availability of a few nicer bottles of whiskey behind the bar broadened the options for casual drinkers.

Bottles of fruit schnapps and a little cooler of Red Bull hinted that the bar draws in a potentially irritating crowd, i.e. the kind of people who order endless rounds of specialty shots and vodka Red Bulls until the room starts to spin, but that would be a late-night crowd if anything.

The menu offerings were pretty standard bar food: burgers, sandwiches, fish and chips, and appetizers friendly for sharing. Prices were within the mean.

A sandwich special of grilled cheese ($11.95) contained a generous amount of sliced apples. It was a good sandwich that was served with a little bowl of tomato soup (which would have looked better without the shoddily applied parsley flakes) and a side of ridiculously delicious potato chips. 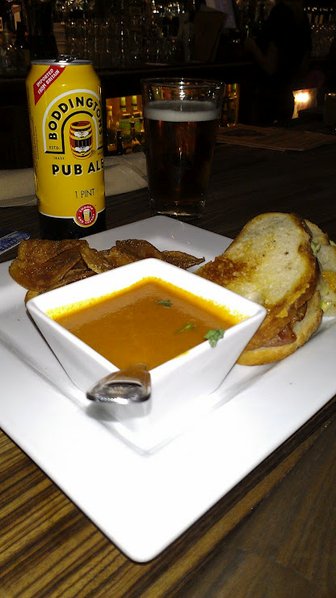 The menu claims that the "gourmet" burgers ($13) are made from dry-aged beef. They are served with fries, whereas the normal burgers ($9.95) that don't get made from the aged meat get potato chips.

A "Dublin burger" with cheddar cheese and grilled bacon was, frankly, a home run despite the $13 price tag. It's very seldom that I burger I request be cooked rare is actually done correctly. Hennessey's came as close as anyone ever comes. Strictly speaking, the burger was scraping the bottom of medium rare, as it wasn't cool to the touch, but serving a burger actually rare is almost impossible since the fatty meat transmits heat so effectively throughout the patty. The burger at Hennessey's was cooked about as close to ideally as I've gotten, and that's really saying a lot. 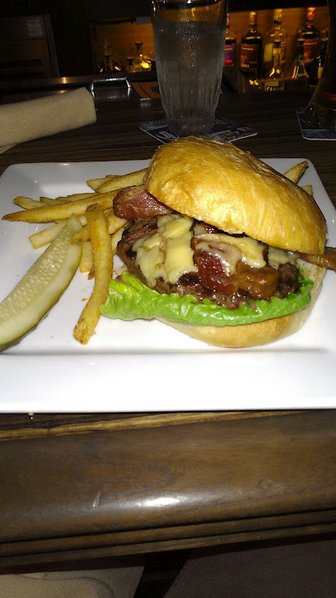 In all fairness, there were many improvements that could have been made. The fries were a bit soggy and the bacon bordered on burnt. Considering the height of my expectations on entering the restaurant, however, those things seemed to matter much less when confronted with that exceptional patty.

Maybe it was the dry-aged beef!