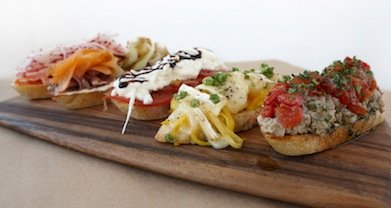 You'll hear a lot about my haunts on here, because as much as I consider myself a food explorer, I'm also a die-hard repeat customer when I fall in love with a place. It doesn't surprise me that Kensington Grill just last night won the California Restaurant Association award for Best Neighborhood Restaurant. We started going there when we lived right across the street from the place, and have been going back ever since. While David and I are in the process of moving, we find ourselves keeping less food in the house and eating out a lot more.

Kensington Grill has different deals for different nights (our favorite is half-priced wine Wednesday). Tuesday night's deal is two-for one "bites and sides," the section of smaller plates on the menu. I like the whole tapas trend, the "small bits to share" thing that's going around. I'm able to delight more of my senses in one sitting.

We began with a bottle of Leal (Meritage) David got the crab and shrimp fritters, I wasn't feeling fishy enough to taste 'em. Okay, how to explain this... grilled asparagus, fava beans and peas, sauces, all topped with a "panko crusted soft boiled egg" that I forked in half so you could see its ooey gooey goodness. This is one of my recent favorites -- it's not in the "bites and sides" section, it's under "Small Plates." It's ground lamb meat with cucumber yogurt, tomato relish, atop naan, and it's playfully called a "taco," but you can see it's much more than that. Oh yes, much, much more.

Sorry all these pics came out a little yellow. The lighting was warm, and I didn't want to mess up the mood with flash.