Located at the House of Charm in beautiful Balboa Park, Mingei International Museum can be viewed as something of an enigma. While it is no less a bona fide museum than any of the others that occupy Balboa Park, it is the kind of art on display there that separates it and gives it its own unique distinction. “The objects here are objects of use arising out of a functional purpose which in turn makes the objects grounded” Says Museum Director Rob Sidner, who became the director of Mingei International when predecessor and museum founder, Martha Longenecker, retired in 2005. Enthusiastic to a fold, Mr. Sidner is a man on a mission when it comes to promoting art and folk art, the style of art that Mingei International is renown for, in particular. “Our real goal here at the Mingei is to inspire people to express their own creativity. By exposing them to the exhibitions put on display here, we hope to broaden their horizons and put to rest a lot of misconceptions regarding art.” What those misconceptions were, Mr. Sidner was not shy at all about explaining. “One really shouldn’t talk about art and money in the same sentence” he says. “Art is not only for the rich and elitist. Beauty isn’t only found in multi-million dollar works. Something simplistic that represents being created by the whole of the individual: The hands, the head, and the heart can be, and should be, viewed with just as much appreciation. Value of art should come from the prizing of an object.” Mingei, meaning ‘Art of the People’, was first coined as term by Japanese scholar Dr. Soetsu Yanagi. In August 1996, the museum came to Balboa Park. “Although I knew of museums before, I never had a connection to them. Being part of the Mingei Museum has been a revelation for me. The experience to work with a great, cohesive staff brings a lot of satisfaction because we’re sharing enrichment.” “I feel the Mingei Museum represents the greatest expression of human creativity because the artists on display here are making useful art that is more than simply aesthetically pleasing.” With a collection that comprises of 17,500 objects from 141 countries, Mingei International Museum is no stranger to artistry. As the museums’ director, Mr. Sidner isn’t either. When asked of some of his personal favorite artists, he responded “I enjoy almost everything from the Italian Renaissance and classic Dutch painters, as well. I also try to stay aware of contemporary artists.” And to all the struggling, budding artists out there, Mr. Sidner’s message is simple and to the point. “People truly getting in touch with themselves is the source of creativity. Build on that and practice. You are capable of doing great things if you work for it.”

Mingei International Museum is opened Tuesday through Sunday from 10:00 am to 4:00 pm. 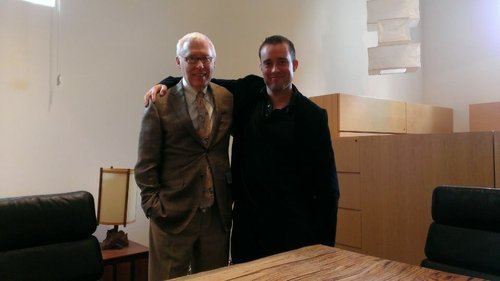