scissors and blood do mix geesus he was tired...as tired as his friend Coaster Dude was after that whirlwind ride to Kansas city...and he didn't take any pics of the HARLEY MUSEUM...dang him!!!

the Cougar couples were there

the sheathe was off...and tiny slices brought droplets of blood that eventually showed thru the ivory hue...his graze moved around the room...and lingered on every beautiful blonde

was she there...somewhere in the crowd...the woman who wanted him to cut her heart out

to fill in the spaces in his head

that exciting but deadly feeling...the one that was so focused that practically nothing could take his attention to another place

but he had to find her soon or the high would disintegrate into chaos...then simple rage would control him and nothing would appease him

"is it THAT blonde?" he thought

Nah, I found your stuff just fine, new format or no. You freaky chick you. 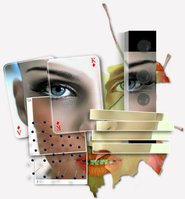 blonde and blonder. I always put an "e" on the end of the word blonde. To me it looks strange without it.

ur blonde is so much classier Quill thx 4 the reminder