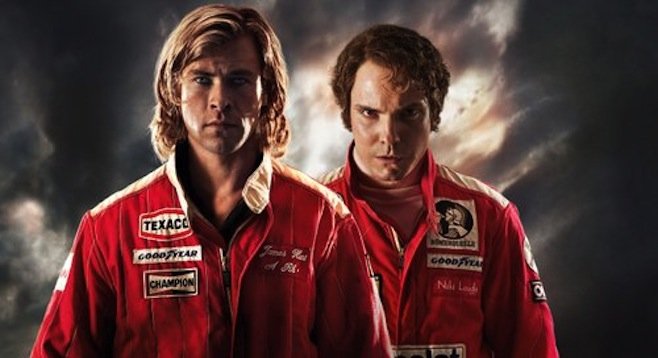 New releases opening this week: Rush, Don Jon, and much, much more!

Whew! So that's what it feels like to write copy. No, thanks. Anyway, Rush was kind of fascinating in its willingness to give the story of the creepy foreign type (Austria? Do they have people there?) equal weight to that of the handsome foreign type (dreamy Chris Hemsworth). It's jocks vs. nerds in the deadly world of Formula One racing. You know, like that gay guy in Tallageda Nights.

On the other hand, if you love food, and lovely pictures of same, and pleasant, unpretentious conversations about eating well, well, you may enjoy Haute Cuisine. The story is a trifle weaksauce, but the pictures are scrum-diddly-icious.

On the other hand (how many hands do we have here?), it may be love you're looking for. We've got an urban high-concept version of that search in Baggage Claim, and a more suburban take (featuring the late, lamented James Gandolfini) in Enough Said.

Phew! I think that will do for now. Have a lovely day, and for heaven's sake, write and let us know what you thought of all these movies we saw!