My father always envisioned himself dying behind a ship's wheel rather than seated in a Sears recliner. Perhaps that's why a copy of Thor Heyerdal's Kon-Tiki took up a prime spot of real estate on my parent's coffee table for the greater portion of my childhood.

The old Navy man wasn't much on literacy -- aside from a Passover Haggadah, Kon-Tiki was the only book I ever saw him read. He was damn well going to see to it that his kid picked up the habit he otherwise had very little use for. After dinner dad took his Maxwell House and Lucky Strike in the living room where he'd thumb through the evening paper. Before the TV was turned on and for however many nights it took, I sat opposite him reading passages of the book to completion.

It's not that I had anything against reading. By that time, I had already devoured Goldfinger, three Man from U.N.C.L.E. novelizations, and The Pushcart War. Required reading lists, particularly those coming from a man whose agenda was to push the only book he ever cracked, were not my style. That's why dad saw to it that the book was read in his presence, instead of in my distraction-filled bedroom. 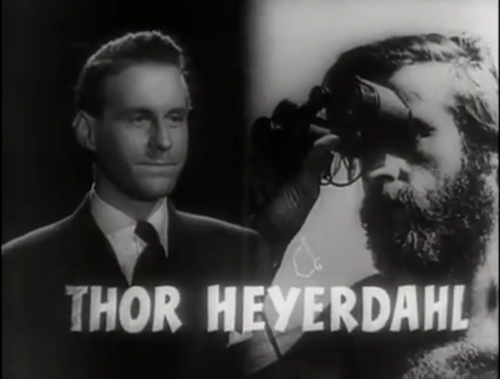 How is it that a movie nominated for a Best Foreign Language Picture Oscar is filmed in English? In order to obtain international funding, the dialog scenes were shot twice in both Norwegian and English.

Roadblocks to perfection: a second-act encounter with a shark bordered on Asian splatter, and instead of feeling around for an ending, directorial duo Joachim Rønning and Espen Sandberg might just as easily have put an ‘Amen’ on it with the exquisite, cosmic passage-of-time sequence that marked day 101.

Minor gripes aside, this sweeping, well-crafted epic is quick to the helm both on land and sea. Though not as generous, the CGI effects are on par with Pi. Combined with production designer Karl Júlíusson’s detailed period recreation of Brooklyn in the ‘40’s and DP Geir Hartly Andreassen’s sense of natural light, they give the finished product a polish that would have quadrupled the film’s relatively paltry $16 million budget had it been shot in the WB water tank.

For you Heyerdal completists in the crowd, here is his 1947, Academy Award-winning documentary in its original language.