Clean the beach, see the movie, get Rimmed

Attention: there are rules for posting that come with this blog. The following edict arrived in the mail: "Please note, the official title is: WARNER BROS. PICTURES & LEGENDARY PICTURES PACIFIC RIM." You done ejaculated a marquee-busting mouthful! I'm all for including directors' names in the title -- John Carpenter's The Thing, Russ Meyer's Beneath the Valley of the Ultra-Vixens, An Alan Smithee Film: Burn Hollywood Burn, etc. -- but giving the studios star billing?! Why the sudden need for obliqueness? 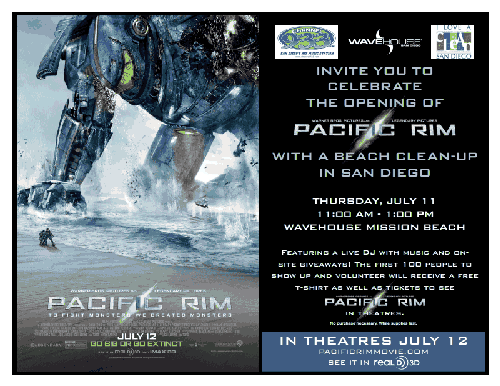 Since it's about giant sea monsters bringing about world destruction, what better way to herald Friday's opening of Warner Bros. Pictures and Legendary Pictures Pacific Rim than with a beach cleanup?

What kind of a Rim job is this? Don't you love it when giant corporations glom onto a worthy cause in hopes that the affiliation will rub off on their product? I think the medical term for it is Kominitis.

Since it is a worthy cause (and free breakfast/drinks), and seeing how you will always be my favorite Yiddishe-kop publicist in this town, here's your plug, LF: the massive beach cleanup in Mission Beach on behalf of the new movie, Warner Bros. Pictures and Legendary Pictures Pacific Rim, takes place tomorrow between 11am and 12pm. Volunteers are encouraged to meet at the Wavehouse, 3125 Ocean Front Walk, between 10:30-11:00am for free breakfast/drinks before spending a couple of hours poking needle-tipped sticks in the sand.

There will also be an all you can scrape marshmallows buffet...ooops, wrong beach cleanup.

According to the press release, "Gloves, bags, grabbers, bins, shirts, movie tickets and clean-up instructions from professionals will be provided to the first 100 people who show up." Why didn't you mention that professional garbage pickers will be involved? I know someone who is perfect for the job. Every Tuesday morning I awake to the sounds of a momo with a shopping cart racing to beat the truck to the recycle bin beneath my bedroom window.

Hey, I'd love to pitch in, but going to the beach is torture on this committed cancer-seeker. It's a giant ashtray and I can't light up.