It's not often that I agree to an interview prior to viewing a movie. There is nothing quite as uncomfortable as having to speak with an actor or director whose latest work hit me harder than a general anesthetic.

With less than 24 hours separating the screening of Stand Up Guys and my interview with the film's director, Fisher Stevens, I put together a "just in case" list of alternate questions if Stand Up failed to boost my interest.

You will be pleased to know Short Circuit never came up.

Stand Up Guys is a throwback to '70's gangster films with three of Hollywood's finest - Christopher Walken, Alan Arkin, and Al Pacino -- starring as a trio of aged mobsters who have less than 24 hours to shake off the mothballs and settle an old score.

Stevens spent weeks rehearsing his actors and was amazed "to see the amount of commitment that they had even at this stage in their careers."

Long before Goodfellas, I always wanted to be a gangster film lover. We've definitely trod Stevens' mean streets before, but damn if he and the boys don't take us on an enjoyable ride through the old neighborhood. 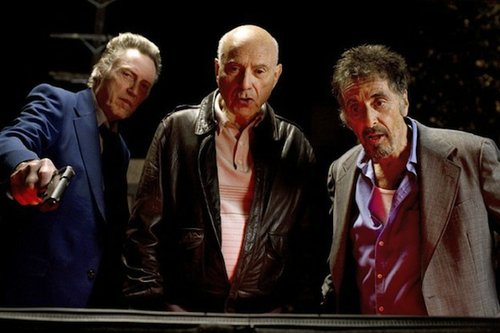 Scott Marks: How did you manage to get these three heavyweights together in one film?

Fisher Stevens: I got lucky. I had a good script. I’m an actor and I kinda’ knew these guys all in different ways. They all responded to the material. When I got the job, the producers told me Chris Walken was going to play Val, the part that Al actually played. I haven’t worked with Chris, but I know him and have run into him in places. I told him that I was going to direct this and asked if he was going to play Val. He said, ‘Well, I’ll play either part.’

I had been told that Al had already basically said he wasn’t going to be in it, so I didn’t think I had a shot with him. I went around with a couple of people and out of the blue Al, who was my friend for years and I hadn’t seen (we used to play poker together)...I did a lot of readings with him over the years as an actor, but he moved to LA and I lost touch with him for quite some time.

He called me out of the blue about maybe working on a documentary with him. I told him that I was directing Stand Up Guys and he was like, ‘You’re directing it now? Can I read it?’ Yes! Please! He read it and wanted to play Val. We told Chris who said he’d play Doc. The first person we wanted to play Hirsch was Alan Arkin. I acted in a movie with him -- the Brazilian film 4 Days in September -- 20 years ago. I called him, he read it, and I got him. that was it.

SM: How much of the dialog was ad-libbed?

FS: We rehearsed a bit and altered a few things. One of the great joys of doing this movie was that on Saturdays we’d go over to Al’s house and rehearse. One of the most impressive things about them is they put so much care and effort into every single line. They’d think about it...it was amazing to see the amount of commitment that they had even at this stage in their careers. Most of what you saw was in the script with a few little alterations by all of us. The only scene that was a total improv was where Chris and Al are waiting for Alan Arkin in the whorehouse. It’s when they talk about penis enhancement and bee stings. That was all improvised by Chris and Al. I shot it from 5 different angles, it was so funny.

SM: At what point in your career did you decide that you wanted to direct?

FS: Well...I’d say once I did Early Edition, this TV show, that was when I realized I can’t just be an actor anymore. I always loved independent films and thought I’d do some indie films. I was very inspired by Jim Jarmusch, John Sayles, and Spike Lee’s first movie. When I saw their work, I wished that I could do that.

When I hit 30, I was like ‘I think I can do that.’ My wish had become a desire. When I started doing series television that’s when I realized it was a hard road to be just an actor. And even though I was making all this money, I needed to do more. That’s when I started directing and fell in love with it. Then I did a tiny movie after that, Just a Kiss, for like $700,000. I wanted to direct after that, but it took something like eleven years. I’m not going to wait that long for the next one. 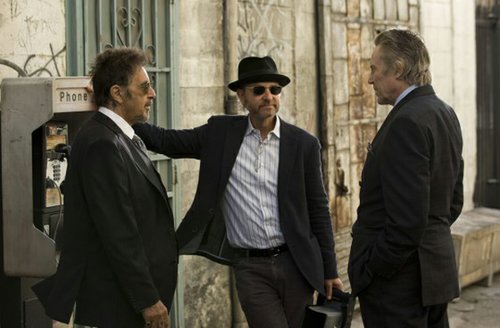 SM: Why a February release? All three of your leads turn in awards-worthy performances. In the least their nomination-worthy. Why didn’t they release it in November or December when it might have done some good?

FS: To be honest, we did make it eligible and it was overlooked. It played in New York and Los Angeles for a week. It’s very political. We’re not a bit studio. I don’t know what happened. It’s just one of those things. I think all three of them are amazing.

SM: We’ve seen this story of seniors turning to crime before in Going in Style and Tough Guys. What is that you wanted to do in Stand Up Guys to keep things fresh?

FS: I wanted to make it 100% real. Tough Guys is the film with Kirk Douglas and Burt Lancaster, right?

FS: Where they come out of jail still wearing their pinstripe suits from the ‘30’s? Not that it’s a bad movie, but Al, Chris, Alan, and I all discussed keeping everything 100% real. Even though Viagra jokes have been done in a million movies, when Al plays it, it’s reality. It’s like time has forgotten this place and these men.

We wanted to make it like that and tried to make it as authentic as possible. We also wanted to make a story about love and friendship and loyalty. When the Jargoniew brothers rape that girl, they cross the line. Even though they’re petty hoods, that’s not how our stand up guys would do it. There’s a certain thing in today’s world where where we’re forgetting about what the words loyalty and friendship mean.

SM: There is no longer a code among thieves.

FS: Exactly. We also wanted to make the film like a good, old fashioned ‘70’s movie.

SM: Female characters usually take a backseat in films of this genre and I was delighted to see how well you fleshed out the background characters are in Stand Up Guys.

FS: A lot of that is casting. I cast really talented women who brought more than what was on the page. Addison Timlin who plays Chris’ granddaughter is just a miracle. I knew Vanessa Ferlito from New York and she brought so much to that character. The cast really helped me. Since I’m an actor, I think that I can identify a good performer and performance. They filled out what could have been cookie cutter roles.

SM: One of the smartest things about Noah Haidle’s script is that it establishes early on that Walken’s been hired to hit Pacino. In a sense, both men had served a 28-year sentence.

FS: Once Al gets out of jail, Chris gets out of jail with him. Chris has been held tight. He knew this day was going to come. At the same time Al’s character breathes life into Walken’s Doc.

SM: Finally, kudos to your art director for finding that beautiful black felt portrait of Billy Dee Williams for Colt 45 that hangs in the bar.

FS: Isn’t that fantastic? I had to call Billy Dee to ask his permission to use it. He was totally cool with it. I’m glad you caught that. 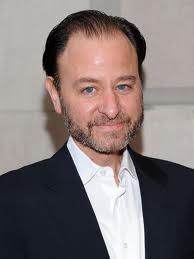 Stevens won the Oscar for Best Documentary Feature for "The Cove" in 2010:

And he dated Michelle Pfieffer for about a year until that came to a screeching end: