Interview: Michael Shannon on The Iceman, the NRA, and what it would take to get him to star in a Smurfs sequel

Overall quality may vary, but Michael Shannon’s name on a poster guarantees satisfaction at least for as long as he’s on screen. The man is quite simply incapable of giving a bad performance.

Sadly, I left Chicago right around the time Shannon’s career at Steppenwolf Theatre was taking off. There were small film roles in even smaller films -- ‘Crack Head’ in D.C. Cab, the heavy in Kangaroo Jack -- but it wasn’t until the film adaptation of Bug, his big breakthrough at Steppenwolf, that Shannon officially appeared on my radar.

On the phone, Shannon was funny, sharp, and exceedingly well-spoken. This was the easiest interview it was ever my chore to transcribe! When the cameras roll this guy affects a creepy vibe the likes of which the cinema hasn’t felt since Robert Ryan passed his deeply troubled baton to Christopher Walken.

His unbroken string of brilliantly realized portraits of human unbalance continues with The Iceman, the fact-based story of a prolific contract killer who manages to successfully hide his line of work from the wife and kids. The Iceman opens tomorrow at Landmark’s Hillcrest Cinemas and AMC La Jolla. Click for showtimes and my review. 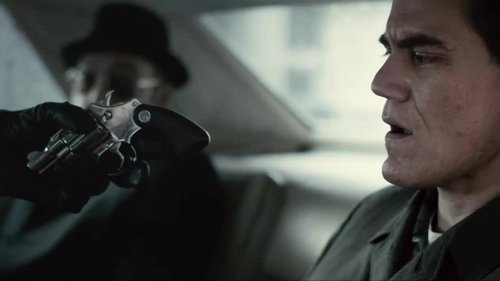 Scott Marks: How much did your experience at Steppenwolf play into your development as an actor?

Michael Shannon: My experience in Chicago in general was my formative experience. Chicago is where I learned how to act.I did three shows at Steppenwolf. The first time I ever got hired at Steppenwolf was a really big deal. That’s king of the highest level you can get, Steppenwolf or the Goodman.

I also worked in a number of storefront theatres over the years. I’m a member of a theatre there called Red Orchid Theatre in Old Town. Chicago is a great place to learn how to act. In New York and L.A. the stakes are always so high and people are always trying to make it big or break into the business. In Chicago it’s a little more mellow, people who really want to do theatre, want to experiment and try new things out. It’s not so expensive, either.

SM: You hear about guys like Daniel Day Lewis who never leave character once filming begins. Is there a rider in your contract that calls for a crate of live bunnies to be delivered to your dressing room each day for you to sacrifice in order to invoke that creepy gusto?

MS (Laughing): No, I’m so exactly the opposite of that. For me the thought of trying to be in character all the time makes me very tired. It seems like it would take a lot of energy. I’m very much into energy conservation. I try to conserve as much energy as possible so that when I’m in front of the camera, whatever energy I manage to have is captured on film. I hate doing great things that nobody is ever going to see. That being said, I’m not like a big Chatty Cathy or anything. I don’t like to make small talk, but I’m not sitting there writing with a quill pen or something.

SM: Where do you find the inspiration for these decidedly dark characters?

MS: It’s different for every story. For something like The Iceman I figure it’s my job to get deep into what I imagine to be the mind of Richard Kuklinski as possible. I thought it was an interesting story because of the double life that he led. I saw the dichotomy between this rage inside of him that allowed him to do what he did for a living, but also a desire for family and to be loved by his wife and his children.

He wanted to have a home that he probably didn’t have when he was younger. I don’t have any ironclad proof of this, but my hunch is that a great majority of the reasons for him being the way he was had to do with his childhood and how he was raised. I think he suffered tremendously when he was a little boy. Not that he’s the only one that’s ever happened to and not that that excuses his behavior. To me it’s a very tragic thing when children are mistreated and they grow into people that they can’t control.

SM: The film opens with a shot of you, as Kuklinski, in prison setting up the flashback. I don’t know how many people remember Richard Kuklinski. Do you think it might have added a bit more suspense had his fate been left uncertain?

MS: That’s the way it always was in the script. I remember the first time I saw that it was kind of a surprise. I guess it’s kind of a classical structure taking the end of the film and turning it into a bookend. It’s not a suspense story or a thriller. To me it is important to know at the beginning that this guy is going to wind up in jail. The whole time you’re sitting there watching the film, you might get mad if you think he’s going to get away with all this. If you know at the beginning that this guy is going to get totally screwed then you can focus more on who he is and why exactly he’s doing what he’s doing.

SM: I was surprised to learn -- particularly in light of Bug -- that you are the a grandson of entomologist Raymond Corbett Shannon. You never met the man, he died before you were born, but I’m curious as to how much, if any, of his legacy did you tap into while researching Bug?

MS: When I was doing Bug my grandmother was still alive and she was very secretive about him and our family in general. She never talked about our lineage or our DNA. A few years after we finished doing Bug she passed away. All of a sudden we found these old papers and articles and things that she had been hiding in her house. It’s kind of bittersweet. I wish I would have had more cognizance of that while I was working on the project, but I’m pretty well finished with Bug, I will say. It’s run it’s course. 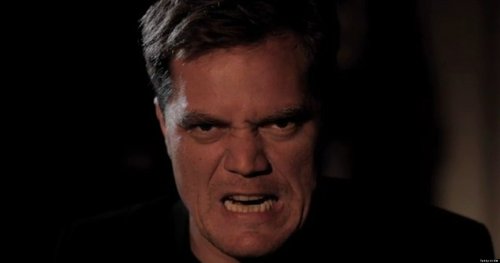 SM: You are like Christopher Walken. Everytime I see you in a movie -- no matter the subject -- there is at least one scene that makes me laugh. Maybe not Take Shelter. I’d love to see you do more comedy.

MS: Kuklinski is a funny guy. Kuklinski has a sense of humor. He wasn’t a completely humorless human being. You watch these interviews on HBO and he says stuff all the time that kinda’ cracks me up a little bit. It’s not like he’s a sweetheart or anything, but he’s not like some zombie. He’s got a little bit of charisma. He had a lot of friends and business associates who really liked and admired him.

SM: You have a role coming up in which you have huge shoes to fill, General Zod. I’m not a big comic book guy, but Superman 2 is an intelligent, well made superhero movie and a great deal of credit must go to Terence Stamp’s brilliant performance at the thinking man’s villain. What can we expect from your Zod?

MS: Our initial approach was to reconsider Zod not so much as a villain, but as his title, the General of a planet. General Zod is not a villain. He’s a general and he tries to take care of the place and make sure that everyone is happy. They have a lot of problems, he gets desperate, and things go South.

General Zod does not wake up every morning wanting to kill as many people as possible. That’s not his m.o. He’s trying to solve the problem that his planet is totally screwed. I adore what Terence Stamp did and there is no way that I could ever do that better than he did, but I felt that he was very cold. It just seemed like he wanted to kill people. What if it was more complicated than that? So that was our initial starting point.

SM: In light of the wave of recent gun violence, both NATO and the MPAA are asking Hollywood to make fewer R-rated movies. Considering the roles that you choose, that would put a considerable dent in your livelihood. What’s your feeling about their request.

I think it’s pretty idiotic. It’s just another lame excuse for the fact that nobody has the balls to deal with the NRA and so they keep finding other stupid stuff to do. We’re never going to get the NRA to do anything so we might as well go bully Hollywood into doing something idiotic. The fact of the matter is the NRA needs to go take a walk off a cliff and we need to get all these guns out of the country. It’s just ridiculous.

SM: (Laughing) Yeah, right? If people walk out after The Iceman wanting to go kill somebody then the movie is not working properly. I don’t think the movie is an endorsement of killing. It does not have a happy ending. I don’t think it glamorizes killing.

MS: In terms of my career, will my career be affected by that? I’m willing to do anything. If someone wanted to cast me in The Smurfs Part 4, if they gave me enough money I would do it. It’s not like I’m on some mission to scare the shit out of everybody. You send me a script, it’s decent, and you’re willing to pay me enough money, I’ll do it.