Late to the Filner party

But hey, everybody else is having fun with it, so...

Yeah, yeah, people have seen Filner and Goldsmith together in the same room. But I still like this notion. 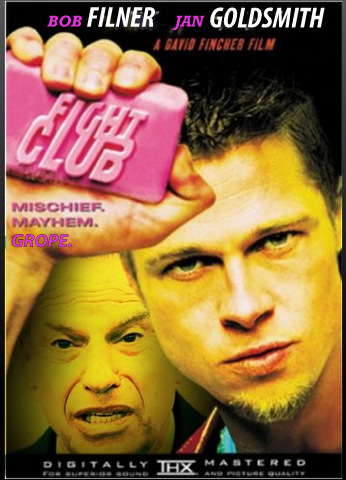 Yes, yes, your first thought is, "Wait a second, Lickona. You've got Filner in the role of the Narrator, which means that Goldsmith is Tyler Durden, and that don't make no sense. Plus, you've gone and left Pitt's face on the poster. Squirrel hair aside, Jan Goldsmith does not look like Brad Pitt." 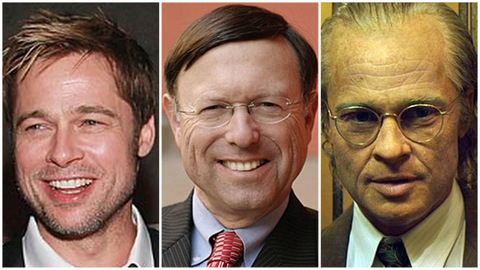 On the left, Pitt circa Inglourious Basterds. Center, Goldsmith. Right, Pitt in The Curious Case of Benjamin Button. Try to tell me that Goldsmith isn't a fantastic midpoint between those two Pitts. Just try. Shut up, I'm not listening.

As for your first point, yeah, that's right. Goldsmith has to be the narrator. Durden has to be the shadow self he lets out only behind closed doors and at closed session City Council meetings. We have to switch up our notions, turn it more towards conventionally handsome Jekyll and rapacious/repulsive but strangely sexually powerful Hyde. Then we pull a few bits from the film, which should probably be retitled Flirt Club, and let the good times roll.

Filner: All the ways you wish you could be, that's me. I dominate like you wanna dominate, I grab like you wanna grab, I am smart, capable, and most importantly, I am free to get with the honeys in all the ways that you are not.

Narrator: Well, what do you want me to do? You just want me to grope you?

Filner: C'mon, do me this one favor.

Narrator: No, but that's a good thing.

Filner: No, it is not. How much can you know about yourself, you've never been in groped? I don't wanna die without any scars on my psyche. So come on; grope me before I lose my nerve.

Narrator: This is crazy.

Narrator: I don't know about this.

Filner: I don't either. Who gives a shit? No one's watching. What do you care?

Narrator: Whoa, wait, this is crazy. You want me to grope you?

Narrator: This is so fucking stupid...

Filner: Motherf*cker! You twisted my nipple!

Narrator: Guess I fucked it up...

Filner: No, that was perfect!

Sure, will do. Did you see Fight Club?

You want I should put in a call to a couple of side-boys on the payroll to turn Monaghan into a mile-and-a-half of new freeway in Pasadena? Lighten up, will ya', Mon! (Now you got me talking Jamaican.)

I liked it, Matthew. To quote a famous line from "Oliver!": "I'd like some more, please."

So F'n Funny - I think playwright is your thing!