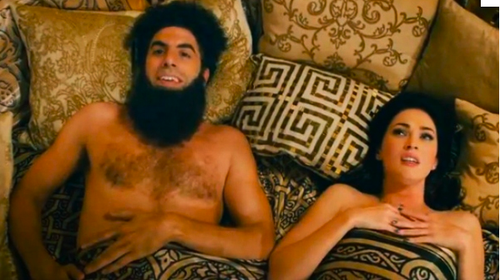 "I understand if you feel a bit uncomfortable right now. I just did to you what I'm going to do to the American theatergoing public on Friday."

John Rubio is back in the critic's chair this week, and so he has to, er, gets to review Sacha Baron Cohen putting a scripted spin on his fish-out-of-water comic stylings in The Dictator. Alas, Rubio concludes that said scripted spin is nothing more than a "ragtag narrative" wherein "much of the humor relies on sequences of shtick that outlast their wit" and "most of the jokes could be found in the monologue of any late-night talk-show host." Ouch!

But Rubio isn't finished, not by a long shot; he still has a thing or two to say about the film's "edgy" brand of comedy. "The audience members, in essence, become subjects to a kind of comedic dictatorship: laugh or shut up."

First Position, a documentary about the run-up to a youth ballet competition, fares just a little better. "The documentary design that was original and invigorating in Hoop Dreams has become a formulaic superficiality. There is nothing new revealed in the storytelling arc here, as the players converge on the same climactic competition." However, "the dancers themselves offer some humanity to the standard proceedings." He notes one lovely moment of such humanity in particular - do go and read.

And what of We Have a Pope, the documentary that dares to ask what happens if God (and the College of Cardinals) picks the wrong guy to lead the Catholic Church? Rubio finds a lot to like, but it's mostly in the details, or in scenes that are "punctuated by everyday banalities that become gems of wit in the ritualistic context: a Cardinal tumbling to the ground in the dark, a reporter interrupting a chant to request an interview as if he were covering the red carpet at the Oscars." As for the unhappy star of the proceedings, "We are left feeling sympathetic to his trials and a bit bored by their length."