Some days the blog-gods smile. Let me explain.

Shia LaBeouf has been on a tear lately, first with his amazing shot at the studio system, and then with his super-enthusiastic embrace of his role in Lars Von Trier's Nymphomaniac. Famously, he has suggested that the film's sex scenes will involve more than a touch of cinema verite:

“There’s a disclaimer at the top of the script that basically says, we’re all doing it for real. And everything that is illegal, we'll shoot in blurred images, but other than that, everything is happening,”

Good times! But in the same interview, The Beef also said of Von Trier, "“He’s very dangerous, you know. He’s like the most dangerous dude that I've ever showed up for. I'm terrified. I'm so terrified, which is why I have to go [and make the film]."

The solution to the mystery arrived in my inbox just yesterday, in the form of an article-turned-press-release on the upcoming psycho-horror indie Compliance. In an effort to set the film apart, the article claimed that "Compliance, shown on Tuesday night at a special screening and panel put together by Psychology Today, is not a Holocaust drama or a gory war film or a Lars Von Trier genital mutilation-fest. It is a psychological thriller grounded in an almost documentary level of reality and will probably hold up as one of the most well-paced, brilliantly acted films of the year." 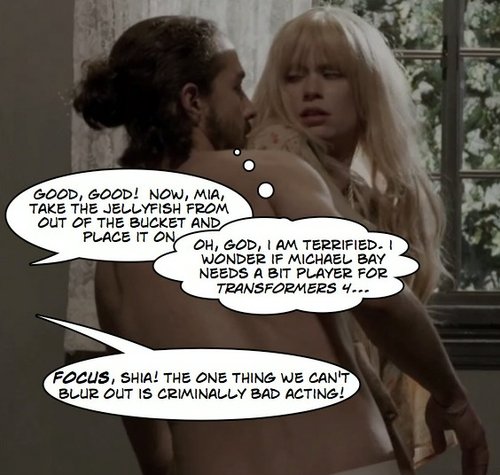 Shia, Shia, Hes Our man...if he can't do it...We'll just have to call Charlie Sheen.