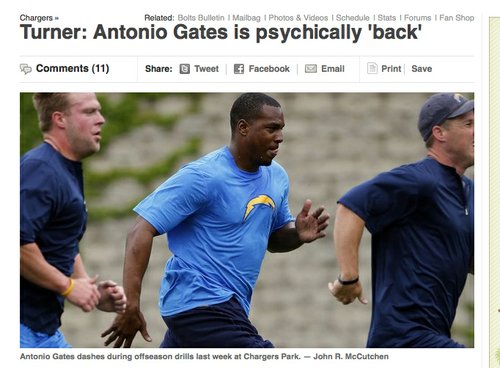 CHARGERS PARK - "Antonio Gates' body is fast undergoing the corruption that comes to all flesh," sighed Norv Turner as he watched his star tight end strain his way downfield. "But the spirit is eternal and incorruptible, a fountain of limitless power and energy-force. All we need to do is tap into that power, and no amount of plantar fascia trauma will be enough to stop him from rising to the level of transcendent fire."

Turner lit a candle and placed it below a crystal chandelier hanging from the goalpost crossbar. "The crystals fracture the candle's light, but they do not destroy it," he intoned. "Rather, the light is gathered into every facet, and reflected back in infinite glory. So shall it be with Gates' fractured foot-bones, once we channel the spirit-force that surges within him."

"Plus, he's been working out," concluded Turner.