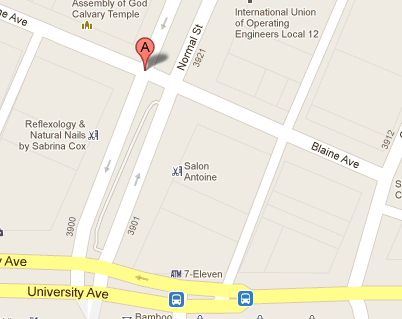 In 1919, San Diego citizen Elaine Blaine had her application for a preacher's license rejected by the San Diego Council of City Fathers, on the grounds that "1 Corinthians 14:34 clearly states that women are to keep silent in church." But, says Sarah Fergus, who blogs about San Diego herstory at Oh, the Womanity!, "Blaine was a woman of remarkable resource and vision. She noted the Council of Fathers routinely granted women licenses to run whorehouses." So she went that route, and opened Jezebel's House of Harlotry in the part of town that would eventually become Hillcrest.

Fergus notes that "it was, in many respects, a typical whorehouse, but with this crucial difference. After the gentlemen had completed their business, but before they had recovered themselves sufficiently to rise and dress, the women of the house would recite to them a sermon written by Blaine herself. The sermons changed week to week. She found that 'gentlemen in such a state of spent repose proved remarkably receptive to the Word of God, and would often come to associate their feelings of satisfaction and peace with the pious teachings contained therein.' She even lost a customer or two over the years, much to her delight."

When the Council of City Fathers learned of Blaine's scheme through an exploratory expedition to the establishment, they were naturally outraged. ("A whorehouse is no place for the Gospel!" bellowed an otherwise placated Ezra Marshall, owner of San Diego's largest hat shop. "Would Our Lord and Saviour have dined with prostitutes and sinners?") They quickly ordered Jezebel's House of Harlotry burnt to the ground, and banished Blaine to the terrifying wilderness of "Lake-side." She died soon after in a rodeo accident after attempting to preach from the back of a bucking bronco during competition.

But when the Women's Movement came to San Diego in the mid-'80s, they found a heroine in Blaine. "Oddly, she was a Christian," wrote Marketa Brannigan in a feature story for The San Diego Reader. "But even so, she stuck it to the man when the man thought he was sticking it to her, and that makes her a model." After deducing that Hillcrest's Man Way was the closest street to the former location of Blaine's holy whorehouse, Brannigan and others mounted a successful campaign to have the street renamed in Blaine's honor.

But now, all that will probably be forgotten, says Fergus, "because Blaine Avenue is about to renamed Harvey Milk Street by the City Council. So much for women."

"And why Milk?," she concluded. "I mean, yes, he was the first openly gay man to be elected to public office. But why does San Diego always wind up getting sloppy seconds from San Francisco? Why not honor one of our own? Everybody already calls the alley between the train tracks and [gay bathhouse] Vulcan Steam & Sauna 'Ramirez Road,'" an apparent reference to longtime local LGBT activist and Queen Mother of the Americas within the Imperial Court System Nicole Murray-Ramirez. "Why not just make it official?"