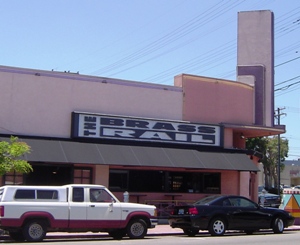 Straight Christian single Rod Drayton is questioning the decision by launching a petition. Here's what he told SD on the QT about it:

Q. Why are you involved?

Q. Now, as I understand it, straight Christian singles weren't asking even for an affirmation from the bar, just a night to hold their annual mixer, and then word came there wouldn't be such an event. Obviously, that didn't go over well with you, so you've decided not to give up the fight.

Q. Are you the person behind the petition drive?

A. I am. The petition has actually taken off in a really surprising manner. And I think what that shows is that even among LGBTQ people, there is growing support for straight Christian single inclusion and safety.

More than 1,200 signatures appeared on the petition, which will ultimately be delivered to The Brass Rail's owner.

And just why would Christian Singles want to have their "Mixer" in one of San Diego's oldest gay bars? Hmmmm.. I smell a Christian rat!

Walter, i am sorry to say that some of our esteemed colleagues just don't get your humor!

The whole thing is silly, but I have to wonder what point Drayton is trying to make. Not like there aren't literally hundreds of "str8" venues to choose from. The gay community has, what, maybe a total of 25-30 venues in San Diego? I'm glad you know that ours are better and more fun than yours, but...

And while we're at it.... While the gay community is probably the most welcoming of any demographic, it still has some issues in the "subcultural" venues. It's a turf war of sorts...but it's getting better. But what has lately become a real irritant is the recent invasion of young straight girls getting messy, drunk, loud and disorderly in the gay bars. It's becoming a regular thing. I don't need to see your breasts, and I don't care if you think you should be on "So you think you can dance." So you know a Madonna song...get over yourself. I'm not meaning to pick on the ladies, but their straight boyfriends don't seem to be the ones shrieking at the top of their lungs or knocking drinks out of the hands of other customers...(and, btw, very rarely even offering to replace them...) It's become commonplace.

Seems like so many of them aren't there to be "accepted" into the family; they just seem to want to show how liberal or scandalous they can be. The decibel levels in the bars rise, and the high pitched shrieks every time they see a friend or hear a song they like on the jukebox annoy just about all of the regular patrons....to the point that bartenders and doormen are finally asking them to tone it down or leave the venue. Regular paying (and tipping...hint) customers are leaving their favorite watering holes in droves. Again, there are hundreds of str8 bars to choose from....take your bachelorette parties there, or conduct yourselves as respectful guest of the community. I'm sure you came there originally as a guest of a gay friend...how about you take him to one of your bars and try to make him feel welcomed there instead? Good luck with that; report back to us on how that turns out....

Gay bars are not zoos and the patrons are not there to entertain you. Maybe you could talk the owners of YOUR bars into being more welcoming to LGBT patrons, and maybe they could take a clue from the "fun" gay bars and make their own bars more entertaining. You can go to your own dance clubs and piano bars 7 nights a week...and leave us to the relatively few venues where we can feel accepted and welcomed. Unlike some gay men, I love women, lesbian or str8, trans or questioning. I'm glad to have you join us...Have fun, but please be respectful that this is all we have.

Someday we won't have "gay" or "straight"bars at all, as they will become redundant and obsolete....

Back to the Brass Rail: I'm glad it made the press, so we can have this discussion publicly. It might be a great opportunity to raise awareness, tolerance and acceptance,...on both sides...

It might be a great opportunity to raise awareness, tolerance and acceptance,...on both sides...

You do not sound very "tolerant". In fact you seem to be the opposite.

Hey you mental MORONS, the entire article is a joke. Sarcasm.

Jeeezzzz....are you clowns really this clueless, even after my earlier comment.

Can you not READ the title of the category this is posted under??????

Perhaps it would help if folks clicked the "Related?" link at the bottom of the story and read the source material: "Point Loma Nazarene University will not allow an LGBT organization on campus. For many students, not only is the decision disappointing, it's also frustrating. Nazarene alumn Todd Clayton is questioning the decision by launching a petition..."