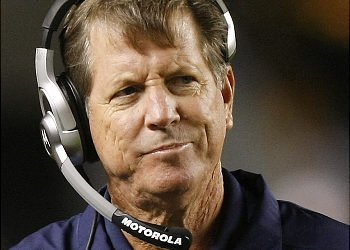 Norv Turner: "I wouldn't want to be Rex Ryan's wife."

San Diego's Coach-Provocateur Responds to Jets Coach's Claim That if He'd Gotten Chargers Job, He Would Have "A Couple of Rings" By Now

"I don't wish to be indelicate, but there is such a thing as foreplay."

THE INNER SANCTUM OF TURNER'S PRIVATE FOLLY, TWO-THIRDS OF THE WAY THROUGH A BOTTLE OF 1863 MADEIRA - "I mean, really," confided Turner, shaking his head over Ryan's statement that the Chargers were "loaded." "He sounds like the former high-school quarterback, now middle-aged and holding forth in the local watering hole, wondering how the class nerd ever managed to marry the Homecoming Queen. He bellows his incomprehension: 'If I were her husband, she'd have a couple of kids by now. I mean, that chick was loaded.' That sort of thing. Alas, such a bull-headed sort of man will never understand the finer points of courtship and romance - which is why he never got the girl in the first place."

Turner paused, as if assessing this reporter's ability to comprehend the nuance and subtlety of his argument, then pressed on despite his obvious misgivings. "A coach's relationship with his team's fans is not some workaday coupling - you get 17 Sundays a year together, hopefully two or three more, and that's it. Fans are often faithful, but atop that bedrock fidelity, there is an ever-shifting landscape of emotional terrain. It's not unlike the sands of a desert, forever being shifted this way and that by the caprice of the wind. Or like a temperamental lover, one prone to forget yesterday's caresses in the light of today's breakdown in the red zone."

"With such a lover," continued Turner, "your approach in pursuit of so precious a prize as a Super Bowl ring requires the utmost delicacy and care. I'm not sure Coach Ryan understands that. It's probably for the best that he's coaching in the land of Snooki."