You probably think this tour is about you.....It's a real gold mine, THERE IS STILL GOLD IN IT and yesterday, I had a private tour. This piece of history is right here behind our town and it is fascinating to see the entire process as well as how man went into that mountain and brought the gold out with crude tools and no electricity; levers, hoists, gravity and manpower got it done.

Back in the day, the tunnels we can now wander through were bustling with activity that the dream of gold created. Once nuggets were found in a creek in the 1870s, it was only a matter of time before word got out and crowds gathered to set up camp. Those early campers became our first townspeople. From extraction to the milling process, the Eagle Mine did it all. This one site drew quite a few penniless prospectors that walked away as very rich men.

Our gold-bearing veins here are contained within the Bedford Canyon Formation from the Triassic age (200 million years ago). This formation was at the edge of the North American continent in a shallow, marine-type environment. Dry land was much farther east with the rocks underlying southern California having not yet been born.

The tectonic situation changed during the Jurassic Period (175 million years ago) and a subduction zone developed in this region. When the Pacific Ocean floor converged with the North American continent, this area metamorphosed due to the heat and pressure into a rock known as schist. Today, we call the resulting area the Julian Schist.

Miners wore candles on their hats back then but today it is well lit with our good friend, electricity. I wouldn't want to be in the tunnel without it. During my tour yesterday, we shut the lights off for a few seconds and I could not see my hand in front of my face. Back then, a miner would earn $1.50 per day at a chance to be part of a big find. He also exposed himself to mercury and cyanide in the process. If his candle went out, it might be EIGHT HOURS before someone would check on him. In a pitch black tunnel with 1000 feet of rock overhead as it rumbled from dynamite blows would send me to another dimension. I decided yesterday that my minor fear of being in small, enclosed spaces (aka claustrophobia) would not be an issue and it wasn't-as long as I could see the opening of the mine and the sunlight.

Last year, one of those "Ghostbuster" groups were up here with equipment to determine paranormal activity. These guys went underground, turned out the lights and asked spirits to reveal themselves. Not my idea of a party but one told me later that there were plenty of spooks down there.

There is also still gold in the mountain but extracting it would be dangerous and costly. For now, we can look at these relics of the past to see what those early prospectors went through for the dream of finding gold. The early pioneers and their desire to change their fortune for the better, strike it rich, hit the mother lode still lives. Today, we just buy Power Ball tickets instead and hope our numbers come up. 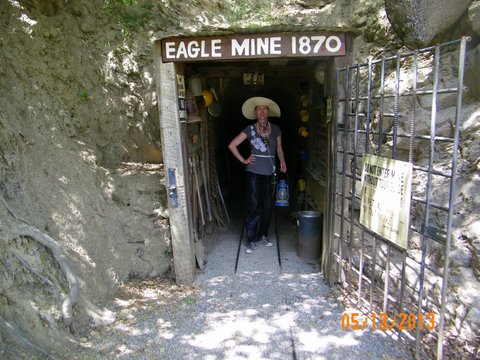 This is the entrance to the legendary Eagle Mine where many went in poor and came out rich with gold.