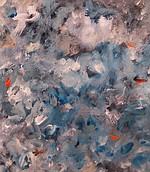 In case you were in a festive mood ...

Who knows what clothes the folks will don when they come to Comic-Con?

Church of the Immaculata, University of San Diego