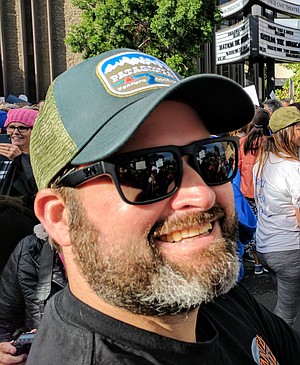 Raised in West Chester, PA. K-12 in public school suburbia. Probably skateboarded a bit too much in my teen years. Shins still dented as a result. Left ankle also notoriously unreliable. Undergrad at University of Pittsburgh. Four years in Pittsburgh was enough. Moved to Breckenridge, CO in Fall of '97 to pursue dream of snowboarding for ever and ever and ever. Eventually settled for one season. Moved to San Diego in summer of 1998, a city known for its characteristic "completely un-Pittsburghesque qualities." Have found it difficult to leave. Other interests include: Music, Film, Mountain-Biking, Tennis, Tetris Marathon, Watching Football. Discussion topics I love that don't exactly thrill my girlfriend when I bring them up (daily): The Minimum-Wage Debate, The Various Factors That Determine The Cost Of A Barrel Of Oil, Ride-sharing, The North Dakota Fracking Industry, Various Methods To Cut The Costs Of An AT&T Uverse Bill. Dream Buddy Cop Film Sidekick: Mark E. Smith From The Fall.

Outside the Santa Cruz Boardroom in Santa Cruz, CA. Local skateshop with lots of legendary ...