Solo, Started to Record 1998. Had Cassette Printed Febuary of the..!. Acoustic. 2002 got into 'Electronic'. Now using a Computer (software), adding to Recorded Withs`: Flute, Electric/Acoustic Guitars, Bass Guitar, Bongos, Drum Pad, Keyboard/Piano. 2009 (publicized along with "International Name-mings"). Gathered a bulk of music, and got printed: 3 discs w/ a dvd. Dvd is of Piano Set, 2003 April Recorded.

In 1992-93 Takin instruction with 'Ellen Johnson'. This is when The potential of Vocal became more confident. [ https://youtu.be/HvqfXDgNpw4 ]

1997 his former drummer. "John Roman Marquez", took "Noni`/Ant" to one of the Get togethers 'Daniel Jackson' gathers. This is where; although a stint. Music Language in Group Impromptu, became more understood.
[ https://youtu.be/Ayc3SpYztWQ ]

I also Write Poetry. I got an Award and Recognized. Poem Got Published
2007. The musics Demo is 'Alternative Electronica/Acoustic Pop'.
I've tooken "Internacional Titles", and again, Also 'Americanizing My Name'. OnLine Mainly. Only a Few Promotionals Around Town Withs`... Ive even just used 'Initials': 'atrj'. My Antiquity Musics: "Nonini o`Antonio". Though, As Of Years To Come, am ANT/noni`. 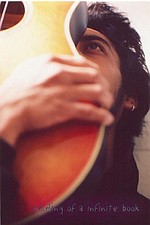 Another one with a type of Compile. Collective Individuals. For Print 2018 as Well. Can ...

A printed Disc 2006. But being release'd in Near Future. Check Cow Records in Ocean ...

A mirror self photo.