This is just too FUNNY, first SCE promises that their new SCE designed replacement steam generators will save ratepayers over a Billion dollars and then when they fail almost as soon as they were installed, SCE now thinks we the ratepayers should foot the bill!.

Get ready SCE, because now the ratepayers are going to demand that the CPUC not only make you and your Shareholders cough up the money but also pay for all the additional expenses that are going to be incurred because of your debacle!

Some estimate that bill to be about $13 Billion, so the next CPUC meeting being held in San Diego (imagine that) to discuss rebates will be very interesting.

Notice that SDG&E, a part owner of San Onofre is laying low after informing their ratepayers that everyone bills will be going up, I wonder why, could it be to reimburse the Utility for the damages they will be force to pay for their part of the San Onofre debacle?

Ratepayers are being suckered by the Utilities and the CPUC that is supposed to regulate them for the public good, instead the Utilities have earned record profits while we the ratepayers are paying the highest rates in the USA thanks to the CPUC and we have enough of sunshine to become an solar energy exporter to states that need it, which would also jump start our economy with many new GREEN jobs.

We the ratepayers need to urge the Governor to re-populate the CPUC with impartial commissioner that will demand that the Utilities start treating us fairly instead of like the Utilities energy slaves!

How do you know what the "vast majority of SD residents want"? Source and/or link please....

With this latest accuser, Gloria Allred seems to have gone completely insane. What she portrays as acts of depravity, any normal person would see as the acts of a very nice man, who reaches out to each and everyone, even those that most people would find disgusting. I urge every one to watch this. http://www.cbs8.com/story/23147776/live-stream-1pm-16th-filner-accuser-gloria-allred-news-conference

I wish these women could all be fully investigated. I bet we'd dig up a lot of dirt. This is all too orchestrated to all be true.

The women are all baloney. Today's shill was hilarious, let's face it. Filner needs great -- not good, great -- lawyers who will figure out how to protect him AND keep him in office, not permitting the scandalous disenfranchisement of the voting public.

monaghan: There may not be such a lawyer on the face of the earth. Best, Don Bauder

What a low blow!

And the U-T will plaster it all over the front page, no doubt. Not!

And that's definitely a good thing! But did you have to say "hard" there? Ewww. TMI!

RE: "According to a Government Accountability Office study, a "best case" scenario that assumes no accidents or other unexpected costs would result in an additional $100 billion cost to taxpayers..."

1. Since when should the Government only consider the "best case" since our future depends upon these decisions? If we applied that same logic to military spending, then we would need no further nuke weapons since we would have no wars and could then eliminate most of our war fighting capacity which would reduce our military spending from about 60% of our entire US budget, which as we all know will not happen, so why should the same false logic apply to our nuclear reactor fleet?

2. That $100 Billion figure is also a phony number since Fukushima alone could easily cost the Japanese a Trillion Dollars of more, especially since they don't even have the situation under control and anything could happen over the next 40 to 100 years... If San Onofre's replacement steam generators both failed while in normal service we could have had a similar disaster to Fukushima, which would have impacted 8 million people and resulted in far more than a Trillion dollars in property loses alone!

RE: Nuclear is safe --That is exactly what they said about Japanese reactors before Fukushima turned into a Trillion Dollar Eco-Disaster nightmare!

You have no crystal ball and cannot predict what will happen in the next 40 to 80 years to any of the nuclear reactors or that using nuclear instead of Solar will prevent any wars; that is just so much nuclear industry wishful thinking!

The reality is that while nuclear generated energy is getting ever more expensive, the cost of Solar (of all flavors) is going downward and its efficiency is getting better yearly, if not more often!

I suggest that you read them and learn some factual information! 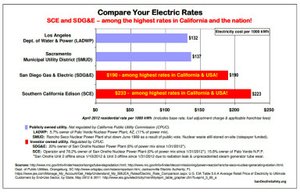 Southern California has some of the most expensive electricity in the USA, thanks to SCE, SDG&E and the CPUC...