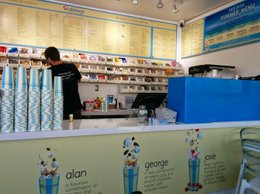 Originally a British chain of milkshake bars ("reasonably popular among high schoolers and undergrads," according to a sufficiently cheeky local source), Shakeaway is like a way better version of Cold Stone or Golden Spoon. 180+ different ingredients make for over a million combinations of blended milkshake. The simple concept is, frankly, delicious and satisfying. Try the "joshua" shake (Skor bar and oreos with sea salt caramel) or the "Dave" (Ferrero Rocher and Kinder Bueno) for a pre-made winner, or just put Cinnamon Toast Crunch and Kit-Kats in there and call it a day.