Last month, we ended up having lunch at Lil' Piggy's Bar-B-Q in Coronado. The fact that I'm a vegetarian didn't stop me from eating there, because in addition to the barbecue, which smelled smoky, tangy and scrumptious, they had a plethora of vegetarian side dishes.

The boys went for the combos: pulled pork, barbecued chicken and beef brisket, each of which is served with two side dishes and slice of white bread, which I understand is a southern thing. From the way that they were chowing down and by the fact that there was silence, interrupted only by lip-smacking and chomping, I gathered that the Q was a hit.

I ordered a small salad and was presented with an enormous plate full of lovely greens and veggies. I also ordered a basket of fried pickles! I'd heard of this southern delicacy before and my brother finally convinced me to try it. I'm so glad he did, although the portion size was big enough for three people. I ate it all by myself. The pickles, which are dredged in cornmeal and deep-fried, come served with a spicy jalapeño mustard dip that is now one of my new favorite things.

Lil' Piggy's also features its own house-made barbecue sauces, three in fact. I mean no offense to Phil's Barbecue, but Lil' Piggy's sauces are better. They're more on the tangy side, rather than being sweet like Phil's. The sauces come with three different degrees of spiciness. I drizzled the barbecue sauce on my fried pickles, but I could have slurped it up like soup.

Lil' Piggy's Bar-B-Q is worth crossing the bridge for. 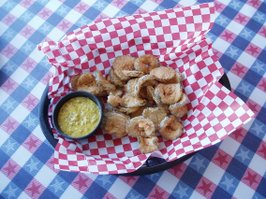