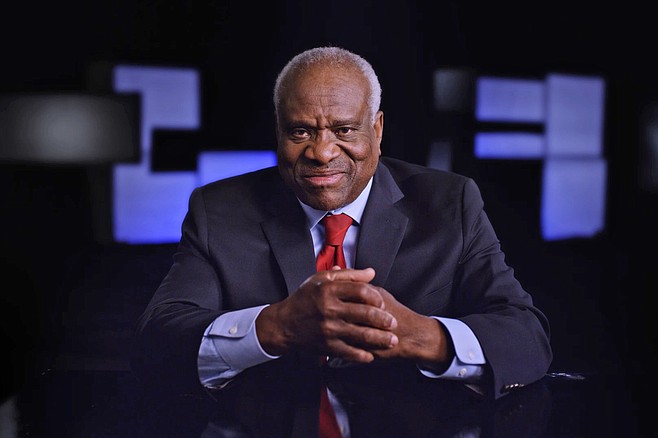 My sworn duty is to review the film, not the man

Spectacles, or no spectacles? That is the question that opens Created Equal: Clarence Thomas in His Own Words. (Thomas settled upon two eyes instead of four.) The next voice you hear is that of writer and director Michael Pack, pummelling his subject with another hard-hitting brain-picker, “How did you decide you wanted to become a lawyer?” One of the most controversial political subjects of his generation is thus afforded an unduly sympathetic portrait — but how else would Pack have been able to get Thomas to sit still long enough for the interview portion of our program?

Given the events of the past three years, it’s even money that our country isn’t any less racist or sexist today than when Thomas was elected to the Supreme Court in 1991. (Listen to the way Sen. Howell Heflin of Alabama puts a scooch too much effort into punching the second syllable in “enigma.”) Even when speaking extemporaneously, much of Thomas’ narration sounds like he’s reading from his autobiography. But he learned about vocal clarity the hard way. He entered seminary as a high school sophomore, where it was suggested by the Dean of studies that if he wanted to succeed in a white man’s world, he’d have to do something about the way he spoke. Thomas put time and effort into adopting perfect enunciation. That said, when discussing whether the libertarian philosophy of the author of The Fountainhead had an influence on Thomas’ life, both director and subject refer to her as “Ann Rand.”

Thomas was bothered by the Catholic Church’s unwillingness to speak up against racism in America. Hearing a seminarian express relief over the assassination of Martin Luther King was the tipping point. Turning his back on so-called Men of God, Thomas traded in Catholicism for combating racism. The photo caption in his yearbook read, “Blew that test, only a 98.” Fully expecting to be treated as an inferior, Thomas reasoned that if he was going to “force someone to have to discriminate against me,” he needed those extra two points. That way, his detractors would be left with nothing but race to call him out on.

The only job offer dangled upon graduating Yale was from the Attorney General of Missouri, John Claggett Danforth. Cook him sweet or cook him sour, in the eyes of the then-lefty Thomas, a Republican was a Republican, and the very thought of working for a member of the GOP was hateful. Moving that minor detail to the side, he had little choice but to assume the position as an Associate AG. But by the time he was 32, a newspaper described Thomas of being opposed to everything from minimum wage law to affirmative action, and mused, “How a black man can say no to these policies is a mystery to most black people.” For many, he was Reagan’s token negro, while others accused Thomas of winning the Supreme Court nomination based solely on the color of his skin. In Thomas’ own eyes, the biggest roadblock on his path to success was “the modern-day liberal.”

America’s prurient nature was given a zetz when Thomas’ Supreme Court confirmation hearings transmogrified into a circus sideshow, thanks to sexual harassment allegations leveled against him by a subordinate, attorney Anita Hill. Her compelling public testimony was a ratings grabber that introduced viewers to the once-deemed graphic and eternally rambling query, “Who put pubic hair on my Coke?” In the end, Thomas remained firm in his belief that a black woman had lied before the Supreme Court for no other reason than to deny a black conservative from obtaining a seat. His appointment was later confirmed by a margin of 52–48.

Situated at opposite ends of the political spectrum as we may be — I believe Anita then and now — my sworn duty is to review the film, not the man. The supervening two hours revealed not so much a documentary as a call-and-response oral history; talking head closeups of Thomas seated in a studio, directly addressing the camera are divvied up between diagrammatic file footage and the occasional appearance by Virginia Thomas, wife of the Associate Justice and the film’s only other interview subject. There’s much to learn about the subject here, and little about the medium. This is one PBS production that never should have left the small screen.

Thomas's legacy will be that he was one one of the worst Supreme Court Justices in American history. It's a disgrace he was confirmed, while Hill became the victim. Horrible man.

All that and the movie's bupkis!