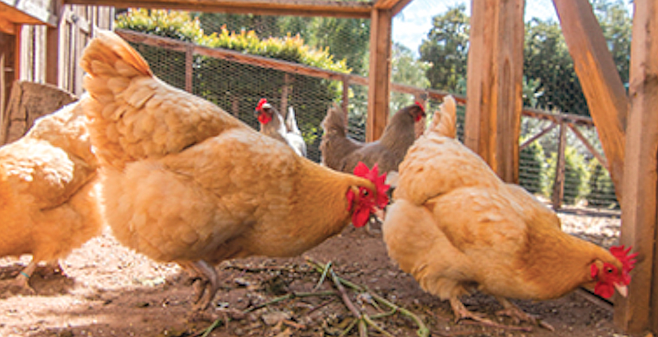 Access to local food is among La Mesa's health, wellness, and climate goals. But for some residents, fresh eggs were just out of reach. While they live in single-family homes, and chickens are allowed in all single-family residential zones, they've fallen through a crack, because of a zoning glitch, circa 2014.

"It was noted that there are a number of properties in the city that are zoned multifamily but are only developed with a single-family residence," said senior planner Allyson Kinnard in a report to the city council January 14. "Those residents are not able to benefit from the policies in place for chickens."

La Mesa chicken-keeper Daryl Kennedy lost more than a source of fresh food; he lost his four birds after tenants of a neighboring apartment complained to the city last year, and he had to give them up. He later asked the city to review the regulations. "The ordinance doesn't make sense," he said.

And it wasn't just that. The same fuzzy rules that banned his birds permitted some unlikely pets in cramped quarters. "You can have five dogs, 10 cats and two potbellied pigs. And that's all in a studio apartment, if you want them."

The 2014 regulations allow up to 20 hens (no roosters), not more than two birds for every 2,000 square feet, and no less than 25 feet between enclosures and neighboring dwellings. An analysis was done to determine how much area chickens typically need. It found that 20 hens on about an acre of land would require an 80-square-foot coop and a 200-square-foot fenced run.

"The use area that would be needed for 20 chickens is considerably smaller than your typical accessory outdoor building," Kinnard said.

That is, even the maximum number of birds allowed would only use a space about the size of a single car garage. An initial environmental study found no potential adverse impacts.

The planning commission held a public hearing in December, then recommended zoning and general plan amendments to allow poultry in all residential zones, including R2 and R3 lots containing a single-family home. The city council has agreed on all of the changes.

Kennedy, who has lost chickens to coyotes and wanderlust, wishes he could retrieve his lost flock. Thelma and Louise were last seen on Highway 8 going east, he said.

What doesn't make sense is keeping chickens in residential areas. They are not domestic pets and can be noisy and create a health hazard if not taken care of properly. What is next pigs?

Chickens aren't that noisy. Roosters can be, in contrast. Like rabbits and other small animals, they can be very affectionate and fine domestic pets with personality.

Any creature, including humans can be a health hazard, if they are not kept in reasonably healthy conditions.