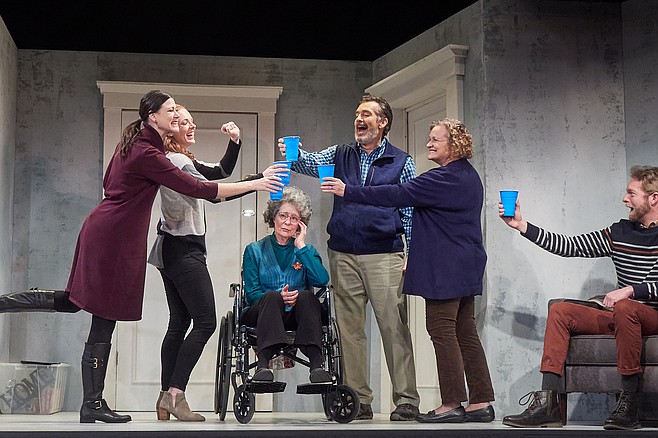 San Diego Repertory Theatre’s production of Stephen Karam’s The Humans does a good deal of stage-setting before you even take your seat. A display by the box office provides “a behind-the scenes glimpse of the Scenic, Lighting, and Costume Design” for the show. The lobby walls feature an extensive exhibition of local artist Lauren LeVieux’s oil paintings, titled Presence: Time Through Structure, and designed to “enhance the visitor’s experience of The Humans…The generations interacting for keeps” in an apartment “where space reflects relationships, where rooms define connection.” And a bulletin board features a prompt: “One thing my family never talks about at Thanksgiving dinner is…” A few of the pinned responses: How none of us are actually enjoying it. Bio Dad. My niece’s alcoholism – everyone acts like falling on the floor is just normal. Sex. Whatever could potentially irk Dad. Things that actually matter.

But after I left the theater, I found myself wishing there had been at least one more element to help me enter into the drama. Something about disaster. As it was, it was a solid day before it occurred to me that The Humans was less about its title — taken from the notion that when so-called monsters tell scary stories, it’s people that serve as the villains — and more about its setting: a basement apartment in New York City, just a little too close to where the towers fell on 9/11. Maybe that’s on me, but I’m not sure. I do know that I wasn’t alone in feeling like the show’s end wasn’t really a conclusion, that what I had witnessed was only the excavation of one family’s dysfunction, and not its exploration. And definitely not its confrontation.

Maybe it would have been different seeing the show in New York. Maybe Dad’s early-on mention of the disaster, bumping up against a mysterious and powerful thud from above that gets blamed on an elderly Chinese neighbor, would have been enough to set me on edge. To make all the ordinary family stuff that followed — the unasked-for advice, the drunken pot shots, the generational tensions — not about itself but about one man’s monstrous, unspoken anxiety. Things that actually matter. Whatever could potentially irk Dad. But here in San Diego, separated from the tragedy by 3000 miles and nearly 20 years, it was too easy to lump Dad’s complaint about location and proximity in with his general air of paternal criticism. (It’s Thanksgiving, and he’s visiting his daughter Brigid and her live-in boyfriend Richard in their new — read: old, barely furnished, and in need of work — apartment; what’s a Dad gonna do but check the football score on the spotty cell signal and trot out some Father Knows Best?) It was too easy to take the family drama at face value, to watch as the wine flowed and the truth came out, and to wait for the domestic fireworks. Wasn’t that the point of the subterranean roots framing the underground apartment? To let us know that this was about Ye Olde Family Tree?

Say this for the Blakes: they’re that rare stage family whose members actually love each other. When they talk about family being the important thing, the thing that endures, they mean it. They have their differences, but nobody’s seething; nobody’s looking to draw blood. That’s impressive, and it’s also convincingly portrayed, especially in the preservation of holiday traditions: the sung toast, the peppermint pig. But it also makes the proceedings feel broad — a joshing line like “Not even terrorists want to spend time in Philadelphia” could play on a network sitcom. And it makes the early-on eruptions of spite — Brigid answering her janitor father’s complaints about the place with “it’s not like you gave me any money to help me out” — feel jarring.

But of course, everyone’s got their share of troubles wearing away at the Thanksgiving bonhomie. Grandma has dementia. Mom is frustrated at work, and sad that her family doesn’t take her more concerns, religious and otherwise, seriously. Dad is soaking the sheets with night sweats. Daughter Aimee has colitis and consequent job trouble, and to top it off, her lover has left her. And daughter Brigid is trying to make it as a classical musician in New York. So yeah, things are bound to get tense, even explosive. But when they do, it’s not the characters that provide the drama — as villains or as heroes. It’s the setting. And while that setting is impressive — Chris Rynne’s lighting and Giulio Perrone’s set provide plenty of tension when called upon — it has a way of obscuring any sort of resolution among the humans. Which may be the point.