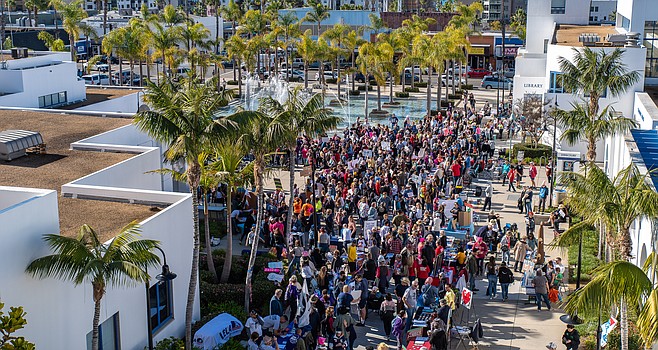 Was the North County San Diego Women’s March Rally a progressive woke-fest where strident speakers and organized flash mobs railed against guns, sexual abuse and inequality? Where lefties get to wear rainbow flag capes and “My body, my choice” T-shirts? 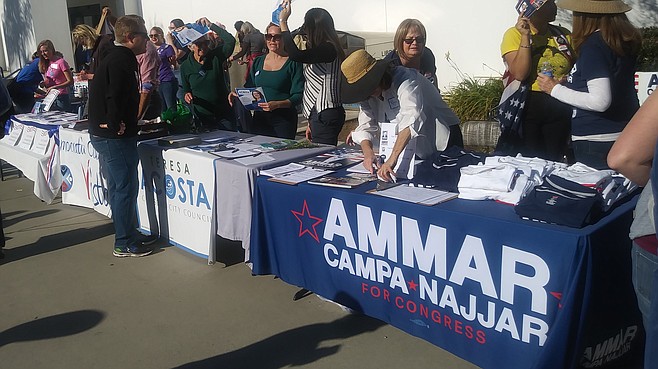 About 20 Democratic officeholders or candidates paid $50 per table.

Or was it a political event, an opportunity for local Democrats to lobby for votes even though the organizer refused to pay for law enforcement fees requested by the city?

The annual event, held in the open area near the fountains at the Oceanside City Hall, was organized by Sue Alderson, an adjunct teacher and counselor at UCSD. She uses the non-profit Broadbent Media as the non-profit responsible for the event. 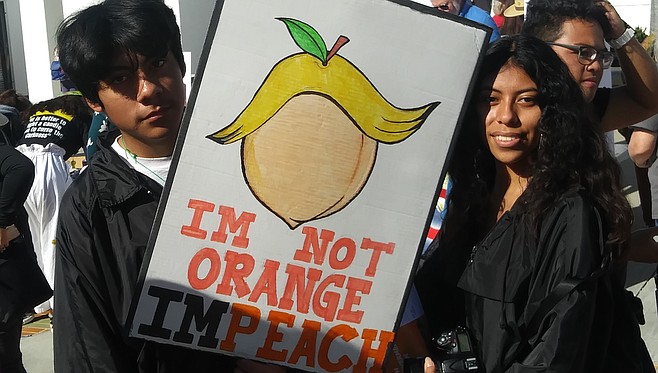 One city insider says the city allowed the event to proceed even though Alderson did not secure the law enforcement permit.

Even though the word “march” is still part of the official name of the event held during Martin Luther King Jr. birthday weekend, Alderson says there was no march connected with the rally this year.

Oceanside police spokesman Tom Bussey reports that there were no problems with the event. Still, the city determined that five uniformed officers needed to be at this year’s event. “It costs to have officers there…I understand there were problems with the permitting, but that is not our problem.” 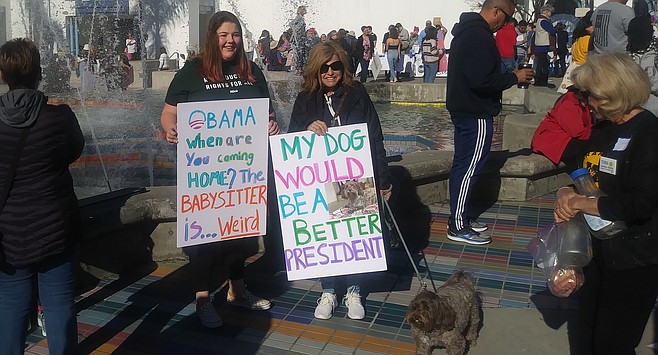 "We are a very, very grass roots organization."

Alderson says she paid the city of Oceanside a basic $355 fee and $250 for a one-day insurance policy. But the city wanted more.

“This year they decided to send me a bill for $1500 for like five sergeants and eight cops. I said ‘Are you serious? This is a woman’s rally. We’re not even having a parade. Nobody is marching. We were not closing any streets.’ I told them I was not paying for it. I told them ‘You guys need to figure this out.’ Seriously, we are a very, very grass roots organization. To pay $1500 for law enforcement is way too expensive. Oceanside was really paranoid about this, and I don’t know why.” 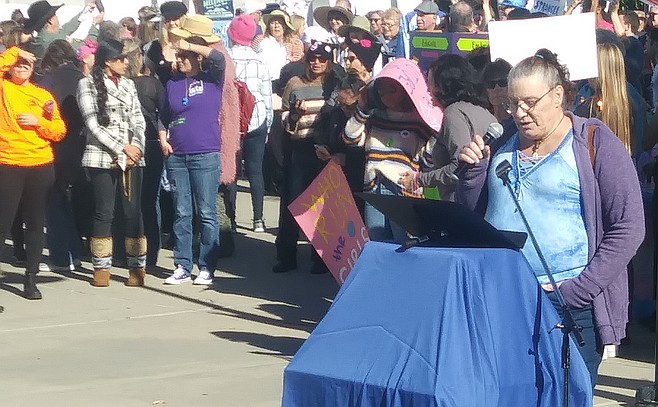 One city insider says the city allowed the event to proceed even though Alderson did not secure the law enforcement permit. A request for comment from city manager Deanna Lorson was not answered.

Groups who supported the Sally Hunt Foundation (shoes for children), Mosques Against Trafficking or Moms Against Guns paid $20 for the right to set up a table at the North County Women’s March.

So what happened with the income from the Women’s March? Besides the $355 permit and $250 insurance policy, Alderson says the table space fees went to cover T-shirts, a DJ and a P.A. system.

And free whistles. After railing against human trafficking or how violent President Trump is against women, the speaker would exhort the crowd: “There is so much going on that pisses us off…Some things make me so mad I have to be a whistle blower,” which then triggered a whistle cacophony.

Though Congressman Levin was honored for helping to turn his district blue, and there was plenty of Trump hate speech on mic and with hand-drawn signs, Alderson says the North County Women’s March wasn’t all anti-Trump or pro-Democrat. “We want to be a voice to as many community activists as we can. Every voice counts.”

Of the demand for an additional law enforcement fee this year: “I think they misread this,” says Alderson about city officials. “They thought it was just going to be an anti-Trump political rally when it’s about women and women’s rights and violence against women.”

Leea Pronovost was one of the speakers at the Women’s March. She says if it was not for this event she may not have the opportunity to speak in such a public setting. Her cause was the reality that 25 transgender women of color have been murdered just for being who they were. “I wish it would have been someone of color [speaking] but because they couldn’t find one, I guess I was next the in line because of my Native-American descent.”

Pronovost goes by the name Two Spirit which she says refers to both her native American roots and her dual-gender identification. “I was born as a male. I can not deny my male side, yet I can also not deny my female side.” Pronovost works as a case manager for the Unicorn Homes project which provides shelter and other assistance for homeless youth aged 14-25. Unicorn Homes is part of Oceanside’s North County LGBTQ Resource Center.

“I only have good things to say [about the event],” says Pronovost.

Every woman's march is a far-left "feel good" waste of time. I don't know if law enforcement usually "bills" for their time, but it's not uncommon for LEO's to be conservative or moderate, and they might bill progressive liberals. Women's March did start out as anti-Trump political rally's disguised as a Woman's March. How did that help women?

Oceanside City Manger Deanna Lorson responded after 5 pm: "I have been in meetings all day and was unable to respond sooner. OPD initially requested that the applicant pay approximately $1400 for one sergeant and 3 officers based on the 2019 event which was staffed with 3 officers and a sergeant and extra officers were called in due to safety concerns with the event flowing into the street. Upon reviewing the application which indicated the event was only a rally, not a march, with anticipated attendance of 300 vs. 600 in the prior year application, the requirement to pay for extra police services was removed. However, OPD chose to send a team to observe the event to ensure that there were no issues. Attendance was estimated by city staff at 1200 total, with approximately 700 at one time."

Scott McCarthy- Not sure how reporting that there was Trump hate speech means that I'm biased. There is a video of that day's event where you can see where the leader on mic leads a flash mob-style dance routine and yells out that the President is a rapist. You can see it here. https://www.facebook.com/pg/North-County-San-Diego-Womens-March-739509589754932/posts/ There is a life reality that says if you dish it out, you have to take it. If these women said it in public and in front of a camera, then it is OK that I report that they did. Do you understand that Scott? I am not here to say if what they said was valid or not. I simply reported that they said it....and that this kind of speech was cause for the police to think they needed to be there. I don't think by reporting it means I am biased for Trump. Absolutely not. I am sorry if my choice of words hurt your feelings. Speaking only for myself: Get over it Scott.