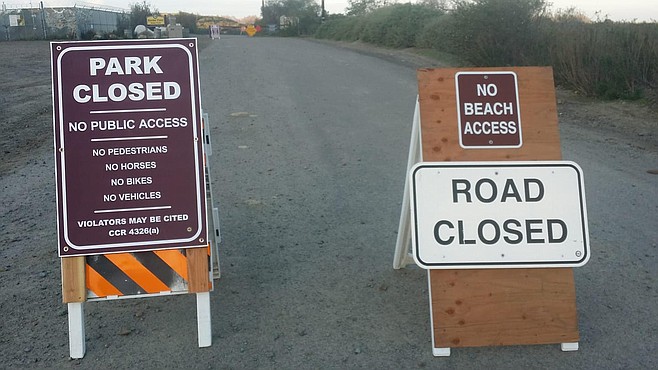 Chanting and a moment of silence follows

On January 12 at about 10 am, a handful of San Diegans travelled across the border to meet with Tijuana locals behind the Plaza Monumental de Playas de Tijuana — The Bullring by the Sea. On photos and videos posted online, about 30-40 people rendezvoused here to console one another in response to the binational garden recently bulldozed by U.S. Customs and Border Protection. 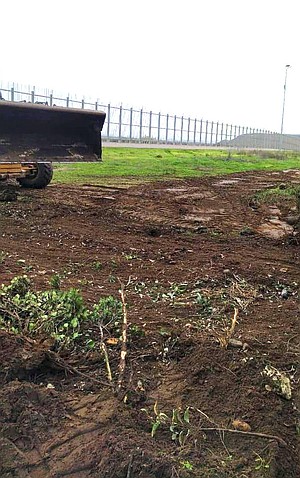 Poster boards with art and messages were hung on the section of the border fence that’s wrapped with papel picado (punched paper), where visitors on the Mexico side can peer through and view the U.S. side of the park, referred to as Friendship Park. One sign translated to: “Plants have no borders. They will grow again and here we will be looking after them”; another read as: “Families are like plants: they have roots that a wall cannot separate.”

I reached out to Daniel Watman, one of the organizers of the ¡Protege nuestro jardín! (Save Our Garden!) gathering; as of presstime he hasn’t responded. 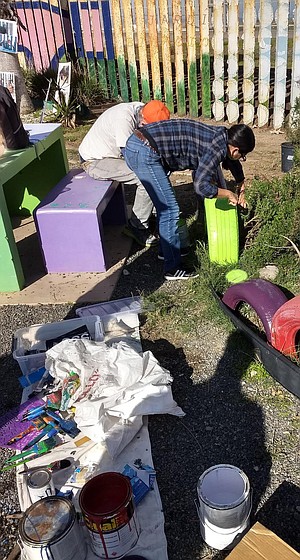 Behind the bullring, a group dug holes to plant “trees of hope.”

“This morning (Jan. 8) Border Patrol bulldozed the entire U.S. side of the binational garden,” Watman posted on his Facebook. “I got to [the Mexico] side an hour after they did it. No warning, not even a sign [and] in fact we were supposedly in talks with them as to how access rules were going to be. 12 years of native plants, contributing to the restoration of the region, representing the necessity for people to be friends and collaborate across cultural barriers to improve and bolster our common ground — gone in minutes. I can barely hold back from shouting expletives here. Mexico’s side still intact means there is always hope.” 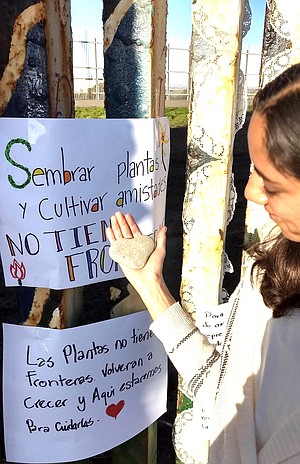 One sign read: “Plants have no borders. They will grow again and here we will be looking after them.”

At about 1 pm on January 12, a few at the gathering behind the bullring, dug holes to plant native “trees of hope”; others painted tires that were partially buried to fence off the garden. A woman sat underneath a dream catcher hung on the border fence, rotated her rain stick and chanted. Then at about 1:25, a moment of silence “for the loss of life and human connection in the destruction” ensued, followed by a communion ceremony lead by the Border Church.

“I think that they are sending a sign to Mexico that it is not a friendly welcome into the U.S. anymore,” said Jamie Shadowlight, a local musician. “This park has been used for many peaceful demonstrations of our common human connection, beyond borders. I have been here for the Fandango Fronterizo, where we made music together with hundreds of people through the border fence, singing call and response.”

Until 2018, the border patrol would conduct the Opening the Door for Hope program, which allowed select families to reunite with one another for three minutes as guards opened the U.S. Mexico Border gate.

(To access the park from I-5, you exit at Dairy Mart Road then turn right (westbound), cross over the bridge, then follow Dairy Mart Road as it curves to the right and turns into Monument Road. Keep following this winding road until you arrive at a parking lot. At the west end of the parking lot, you will see an entrance gate and up further, a kiosk which is the entrance to Border Field State Park. On the park website, it says that it is closed due to the recent storms.)

“Jimmy” from IB is saddened about the reunification-program no longer being active. He was part of the vintage VW-caravan in 2018, where some of his buddies drove up from Mexico, while their other buddies drove down from Canada — to rendezvous and unify here.

“I resent the limited access here,” he said. “The locked gate to our cars — no story is complete without a visit to the area. And the road is below sea level. I can see why they would not put money into the park if the road is fucked. Then there is the sewage issue — I could go on and on …. the rude Border Patrol which controls the access to the circle.”

Per NBC San Diego, Chief Douglas E. Harrison from U.S. Customs and Border Patrol confirmed the binational garden was torn down on our side of the fence.

“Traffickers cut the legacy border mesh and were using the binational garden to cover illegal activities,” he reportedly said. “I know they had to take measures to eliminate the vulnerability. I contacted Friends of Friendship Park and will meet with them to discuss the next steps.”

Crazy. I was there yesterday on a tour and told the guy "there used to be benches and tables there, not sure when they took them out."

It was very recent...