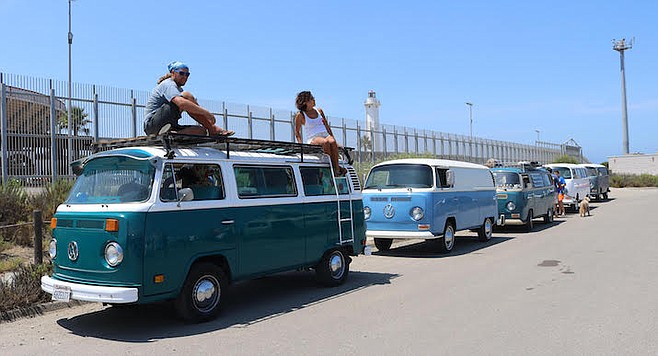 Met by VW fans across the fence

On July 29 at noon, about 75 vintage Volkswagen owners rendezvoused at International Friendship Park in Imperial Beach. 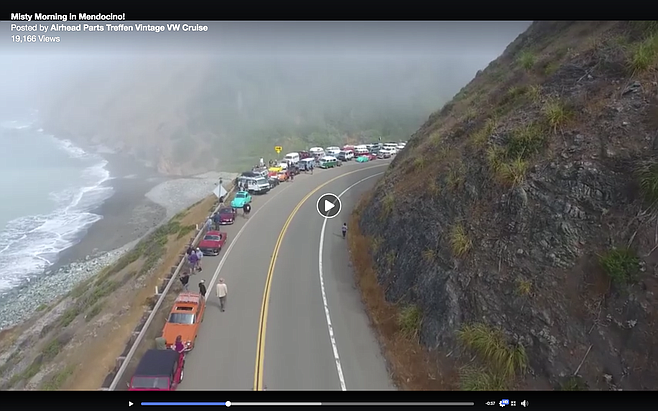 This was the last stop for the Treffen: “A traveling [rear-engine] Volkswagen carnival, complete with cruises, camp outs and car shows; covering the entire length of the west coast in ten days.”

Some drove in from as far as Canada, Idaho and Michigan; the annual caravan started in Port Angeles, which is about 80 miles northwest from Seattle, Washington. 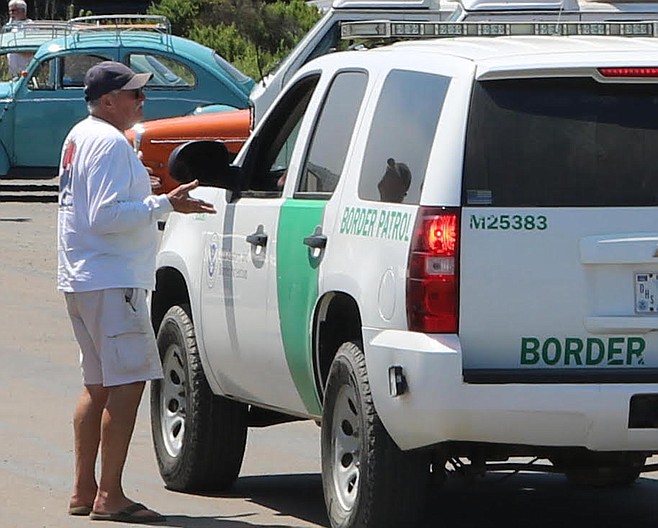 Imperial Beach resident Tom Summers talks to Border Patrol. He drove his turkis colored 1962 VW Bus up to meet with the caravan.

Two weeks ago, Imperial Beach resident Tom Summers drove his turkis colored 1962 VW Bus up to meet with the caravan.

“I’m the only San Diegan that made it to Washington,” Summers said. “Normally I’d be in La Paz with my Volkswagen right now.” 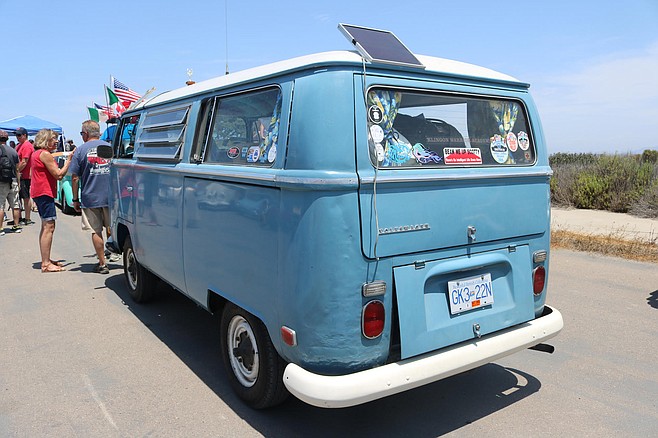 On July 20 at 9:00 am, the Treffen, which is German for "meeting," commenced. The group cruised down Highway 1/101 the whole day then arrived at the Astoria–Megler Bridge at around 6 pm. 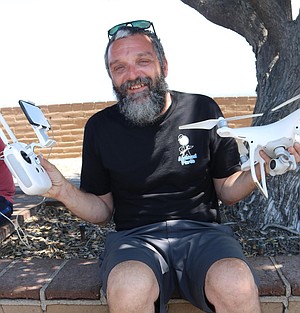 Andre Toselli, the main organizer for the caravan, drove up to Washington from Ventura.

“The bridge is epic,” Summers said, “it’s four miles long and at the other end of the bridge, at Astoria (Oregon), that’s where we camped for the night.”

Some of the VWers booked a spot at the campgrounds while others crashed in hotel rooms. “I camped at the hotel [parking lot] and I got to shower in somebody’s room,” Summers said, “this is what a lot of us do that sleep in our buses; we call it urban camping and all we need is a parking spot or a [house] driveway.” 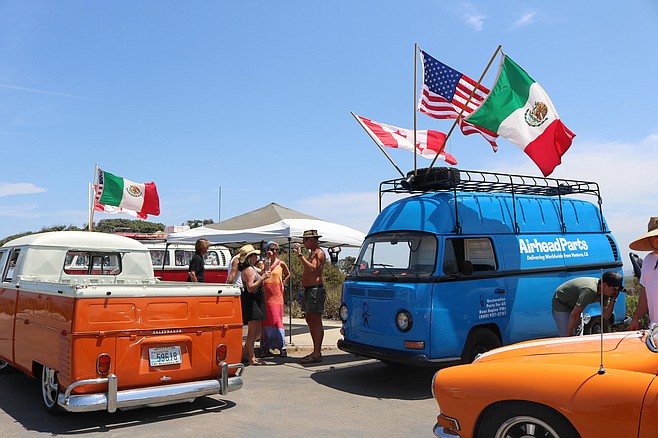 Toselli's was postal vehicle in Switzerland.

The next day, the caravan cruised down the Oregon coastline and Summers’ bus broke down at Newport, which is about 150 miles south of Astoria. 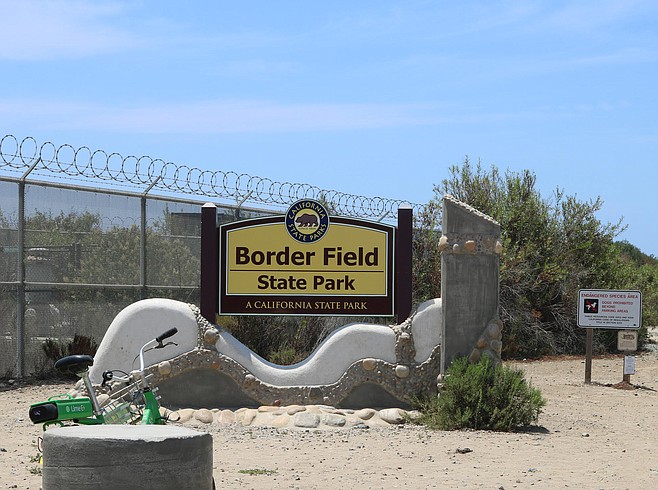 VW will cover the 75-or-so $5 entrance fees at Friendship Park.

“The problem was a broken clutch fork,” he said, “the thing that pulls the throwout bearing when you disengage the clutch.”

Jim McGill, who drove in from Idaho, was following Summers in his ’67 VW Westy. 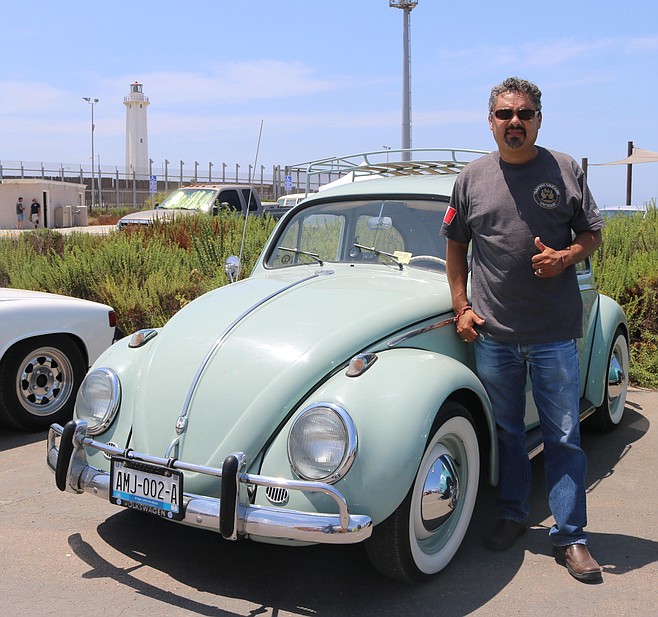 After they pulled over, Summers’ female co-pilot and another caravaner knocked on the doors of a nearby house attached to a mechanic's garage. The gentleman and his wife that answered the door were apprehensive at first, but they “warmed up immediately being from Idaho (like Jim),” posted the caravaner on the Treffen Facebook page. “It turns out [he] had everything they needed; they were awesome.” 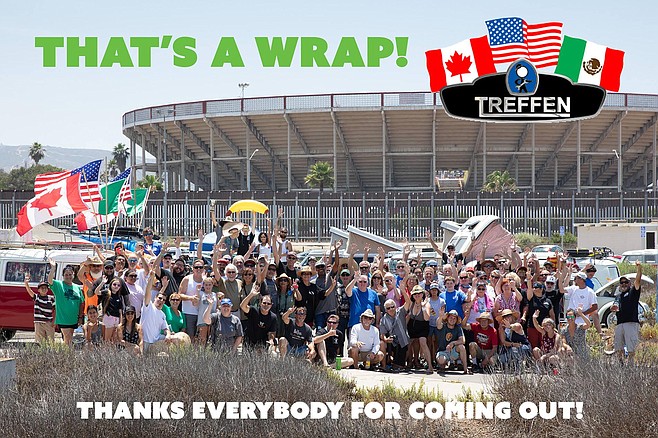 “Jim jacked the back end up, dropped the motor, and we straightened it (the clutch fork) and welded it up,” Summers said, “we put the motor back in and we were rolling. I was only down for three hours and I caught up with the crew that night at Coos Bay.”

“It’s such a communal spirit to the repair process that’s really cool,” said Andre Toselli, the main organizer for the caravan. He drove up to Washington from Ventura, then lead the caravan southbound with his blue 1971 factory high-top commercial VW that was a former postal vehicle from Switzerland.

In the next seven days the group trekked and stopped at Crescent City, Garberville, Santa Rosa, Pacific Grove, San Luis Obispo, and Ventura. They reached San Diego on July 28; many camped out in their buses on a beach-front property south of the Imperial Beach Pier.

The next morning, on July 29, the group met at their last Treffen stop: Friendship Park, next to the bull ring at Playas de Tijuana.

Carlos Ontiveros, a member of Buses Only, a VW Bus club in Tijuana, couldn’t make it to the U.S. side of Friendship Park. “We can see them (the 75-plus VWs from Treffen) from above the plaza or between the bars from our side.” Last year Ontiveros and many VW owners from across the border met with the Americans and Canadians from Treffen, at the front of the bull ring.

Ontiveros’s buddy, Ezequiel Vazquez, from the Tijuana Vintage club crossed his 1965 VW Bug through San Ysidro. “I give them a lot of respect for the energy and effort to drive their vehicles that are 60-70 years old,” he said, “and all the way from Canada.”

“Volkswagen of America supplied us with a master mechanic,” Toselli said, “and he takes care of their museum cars, but for this trip, he’s been keeping a lot of us on the road.”

Summers added that VW will cover the 75-or-so $5 entrance fees at Friendship Park.

Some of the VW builders said that VW corporate wasn’t so supportive of them before.

“Coming back from Dieselgate, which was a devastating debacle,” Summers said, “these guys at VW are serious about rebuilding their image.”

Damn, I missed the event. (My 1979 Bus has a balky fuel system and is now "under the weather") How does one communicate with VW clubs for example without using Facebook?