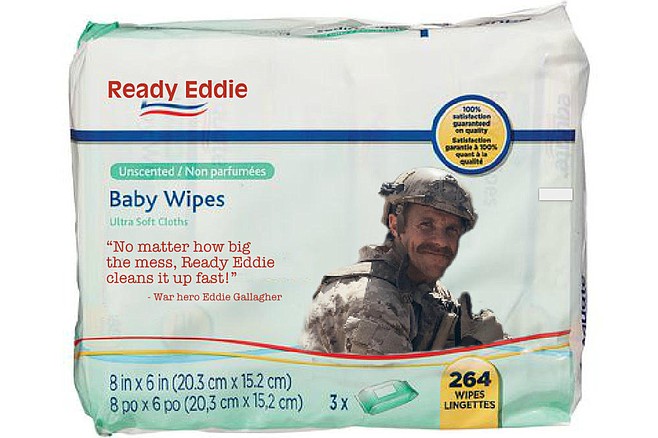 The New York Times may have published leaked statements from former Navy SEAL Eddie Gallagher’s accusers saying that he is evil and toxic, and that he wants to kill anybody he can, but you know what they say about publicity. Since being found not guilty of murder and getting a pardon from President Trump for his decision to pose for a photo with an enemy’s corpse, Gallagher has been getting down to business. He’s done pitch work for Salty Frog Gear, which he created in collaboration with Nine Line Apparel. He’s endorsed coffee beans and protein shakes. And now, he says he’s proud to announce the formation of Ready Eddie-brand cleaning supplies. “I cleaned up plenty of messes overseas,” says Gallagher. “And then when I found myself in another sort of mess back in the U.S., I got that cleaned up too. You won’t find any stains on my Navy whites! No tarnish on my Trident pin, either. I’ve even scrubbed my public image until it shines! Let the Mean Girls who accused me play at mud-slinging all they like. Ready Eddie is ready for them!”