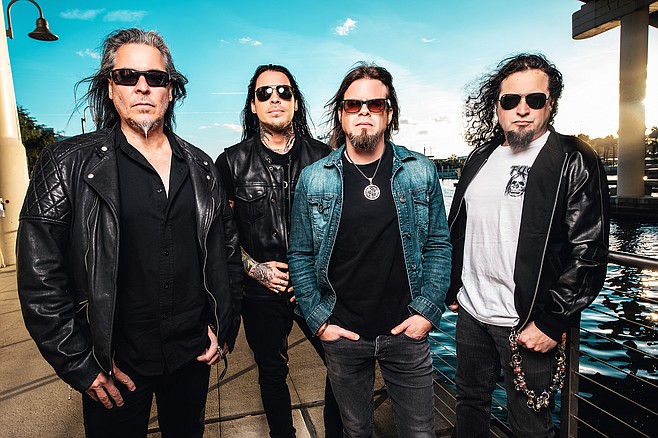 Queensrÿche, who will be 40 years into their prog-metal run by the time you read this, are painfully aware that they’ve got some members from the classic years who aren’t around anymore; and some songs not in the set, that some folks want to hear. They’re okay with that.

“Obviously you will always have some people wanting to hear a certain song that you did not play,” says singer Todd La Torre, who took over from original singer Geoff Tate in 2012. “That being said, we are constantly hearing from people to play more of the new material. Some don’t know the new stuff, but many do.

“If we are going to tour on a new album, then we have to commit to playing the new material as well as back catalogue songs. People are starting to sing the new songs at our shows, so that is such a promising thing to see.”

The new album’s called The Verdict, with lyrics dealing frankly with the political landscape and societal issues — not just American landscapes and issues, but all around the world.

They do take time out, though, for some commentary on personal relationships, stressed by La Torre as crucial to the band’s process. “You also have a life outside of music when you aren’t on tour, which isn’t that often for us. We all have families, and there is always going to be another show. You can’t get the time back with loved ones, so it’s about finding a balance.”

Straddling the line between two genres might seem daunting, but the band, hitting the Music Box on January 29, takes the task, and the label, in stride. “‘I’m okay with prog-metal,” allows La Torre. “Queensrÿche to me is more of a melodic hard rock band with progressive and metal elements.

“I also consider ‘progressive’ to be more of a mindset than what it seems most people today equate ‘prog’ to be, i.e. crazy musical solos and odd time signatures. Pink Floyd is very progressive, but not in an obtrusive way. It’s the subtleties that make it great. There are a million bands out there playing a million notes in every available space of music. Space in music is missing. The music between the notes matters as well. I don’t particularly mind if people try to categorize music. In the end, it is all subjective anyway.”