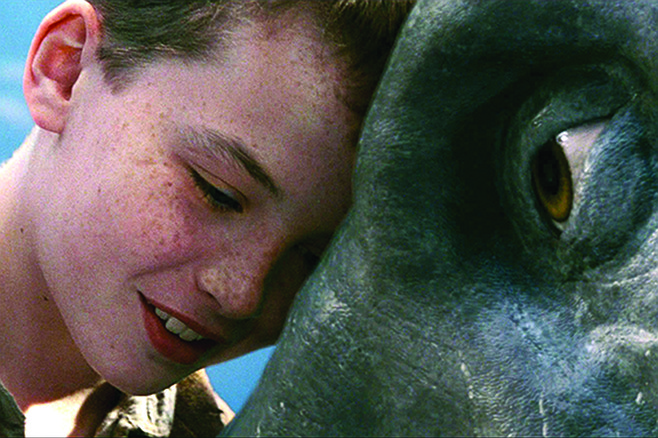 Family movies with ghosts of cartoons past

This week’s goal was to find three films to unite families around the set that didn’t contain any references to Christmas. The first two came easy. For some crazy reason, I had it in my mind that The Spy Who Loved Me was the best of the Roger Moore 007 outings. Turns out there is no such thing.

Rodney Copperbottom (Ewan McGregor), a gifted young automaton being raised in a creative household, has but two goals in mind: making the world a better place and meeting his idol, tinkering guru Bigweld (Mel Brooks). The latter ambition forms the basis of this colorful and wildly imaginative animated journey of discovery. For adult viewers, Robots is brimming with ghosts of cartoons past. Bigweld’s gatekeeper is a direct descendant of Frank Morgan’s sentry in The Wizard of Oz, but upon closer inspection of the character’s design and movement, one can’t help thinking Kukla, minus Fran and Ollie. There are also plenty of visual puns, a staple of Looney Tunes and Merrie Melodies. Like their predecessors, the filmmakers never resort to close-ups of signs or objects, preferring instead to discreetly place them in the frame in hopes that viewers will pick them out — if not immediately, then on subsequent viewings. There are virtually no musical numbers to instantly remind us how forgettable they are, nor is there a heavy emphasis on cartoon romance. The breakneck pace and soak-it-all-in dazzle of the first hour may eventually get the best of younger viewers, but not enough to distract from the overall wonderment.

The Water Horse: Legend of the Deep trailer

With World War II raging just out of earshot, young Angus (Alex Etel) strolls along the banks of Loch Ness, where he happens upon a dirt-caked egg. In the tradition of classic Disney, an animated character (in this case, a CG sea serpent named Crusoe) not only helps a young boy conquer his fear (in this case, hydrophobia), but also assists the child in coping with the death of a parent. And both kindnesses are carried out without once turning to maudlin sentimentality! To help pull this off, a new wrinkle must first be added: there can be only one Water Horse on earth at a time, with each creature possessing both sexes. (The hermaphroditic slug perishes immediately upon giving birth.) Looking to speed things along, any attempt to explain the creature’s speedy transition from rubbery newborn to fully-developed, Widowmaker-sized menace is wisely brushed aside by director Jay Russell. High point: the dubious task of establishing an underwater net in hopes of snagging a German U-boat leads to spectacular results when the Home Guard mistakes Crusoe for a boatload of attacking Nazis. If I had my way, the money shot — a boy and his sea monster going for a bareback moonlight swim — would forever eradicate the image of a punk on a bicycle piloting an adorable alien past a moonlit backdrop that is as luminous as it is ludicrously conceived.

The Spy Who Loved Me trailer

Strong were my memories of a villainous Richard Kiel, the pre-credit parachute stunt, the magnificent destruction of Blofeld-substitute Curt Jurgens’ underwater city, and a spectacularly sexy Barbara Bach. But with the exception of the money shot, the opening scene is far below the standard set by the series over a decade earlier. While production designer Ken Adam’s interiors are as dazzling as always, the exterior shot of the underwater city floating above a mismatched horizon line looks more like Toho than Pinewood. Ms. Bach is dazzling, but I’ll never get those dirty pictures of Ringo out of my head, and Kiel’s character is named after a Spielberg picture. As bad as everything is, nothing prepared me for what I was about to witness: Bond first encounters Jaws at some type of spiritual love-in set at the foot of the Sphinx. Director Lewis Gilbert obviously couldn’t get the geographical screen direction straight. In one of the most brazenly inept displays of post-production patchwork ever, the filmmakers superimpose a still photo of Moore, gun in hand, over a boulder and matte it into the action, making it appear as though Jaws is being preyed upon by a billboard. If you don’t believe me, hit the pause button at precisely 29:15.

What do you have against Christmas???

More to the point, "The Spy Who Loved Me" has the best opening sequence of ANY Bond film!!! Before OR after!!! Spiritual love-fest at the foot of the Sphinx??? Were you doing bongs when you watched this, Marky??? It was part of a exhibition for tourists, NOT a "spiritual love-fest." Pat attention. (lol)

Tourists? It's like a bunch of zombies attending an Herbalife retreat! I stand by my words.