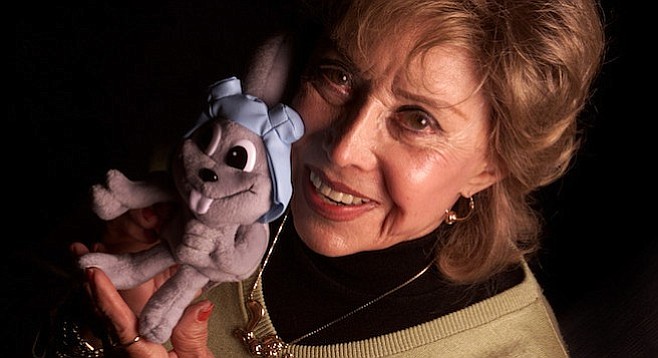 Little Scotty’s weekdays began with Chicago’s legendary Ray Rayner Show. One could always count on Ray for a Tweety and Sylvester cartoon featuring June Foray as the voice of Granny. Lunchtime fun consisted of Bozo’s Circus and a Looney Tunes or Merrie Melodies featuring any number of Foray favorites such as Miss Prissy or Witch Hazel. A post-dinner spin of the dial found Foray’s Nell Fenwick, Rocket J. Squirrel, and Natasha Fatale hanging out in Ward J.

June Foray’s voice was in certain ways more familiar to me than my mother’s.

There wasn’t a major animator she didn’t work for, and with over 300 shorts and features to her credit, assembling a definitive compilation was not going to happen. What follows is a reel consisting of a dozen or so favorites including one that’s new to me.

Research unearthed a historical footnote. The stereotypical Mammy Two-Shoes character from the Tom & Jerry shorts was generally voiced by African-American actress Lillian Randolph. While poking around YouTube in search of material, I found a snippet featuring Foray in the role. M-G-M studio brought her in in the mid-’60s to rerecord the voice for future generations. Though we never see the character’s upper torso, there’s something about a pair of African-American legs that clashes with a Maureen O’Hara Irish brogue.

When the voice artist passed on Wednesday at age 99, no Kleenex was needed. A smile-inducing glow of nostalgia overcame any sadness. June Foray was blessed to have given voice to dozens of revered and instantly recognizable cartoon characters. If finding the cure for cancer or unlocking the key to world peace are out of reach, what better way to pass through life than as a source of happiness?