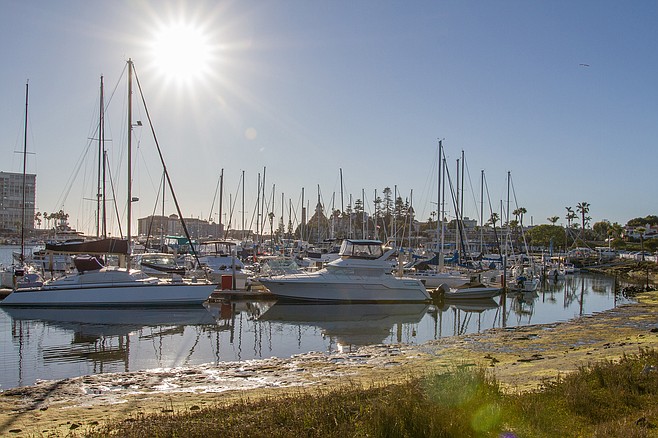 How Coronado Yacht Club fends off the public

The Coronado Yacht Club is nestled in a cove on the northwestern end of Glorietta Bay, where where it is flanked by neighbors such as Bluewater Boathouse Seafood Grill and the Coronado Municipal Golf Course. The Hotel Del Coronado stands just across Orange Avenue. The Yacht Club was founded in 1932 and has deep roots within the region. In fact, it predates the existence of its current landlord, the Port of San Diego, which was established in 1962.

But for close to a decade, the Coronado institution has been in a bit of a jam. According to Matthew Herron, a former member of the yacht club, the stalemate stems from demands the California Coastal Commission has placed on the club.

“It’s a matter of common knowledge around Coronado that they raised the money for a clubhouse but are unable to build it. They blame the Coastal Commission for requiring a public path through the yacht club. But, while they’ve been doing that, the time limits on their two extended leases have expired,” Herron said. “This has been going on for I want to say eight or nine years.” 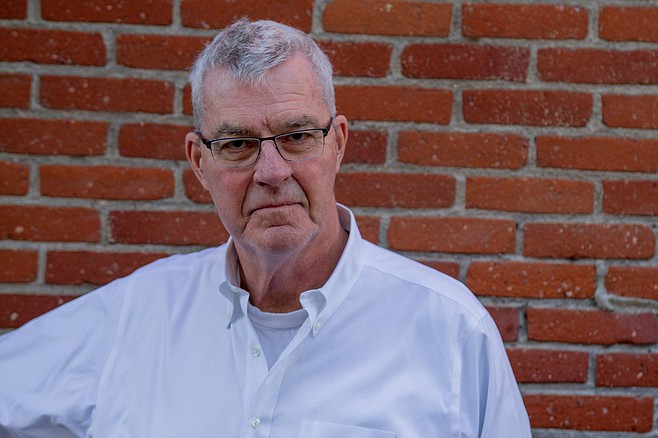 Former member Matthew Herron believes the yacht club should give up its lease and let the marina go public.

The club’s original lease was with the city of Coronado, but they entered into a long-term, 40-year lease agreement with the port after its inception. In 2011, this term expired. Since then, three different short-term leases have been issued to the yacht club. The first ran from November 2011 through October 2014. The second ran from November 2014 through October 2019. Their current lease was issued at the beginning of January 2019 and runs through December 2023. "There’s been such a long passage of time since the fundraiser for the new clubhouse, which was back in 2010 or something like that, and nothing’s really changed. They put the drawings up on the board years ago, but they can’t proceed because they just aren’t going to give the Coastal Commission what it wants,” Herron said. 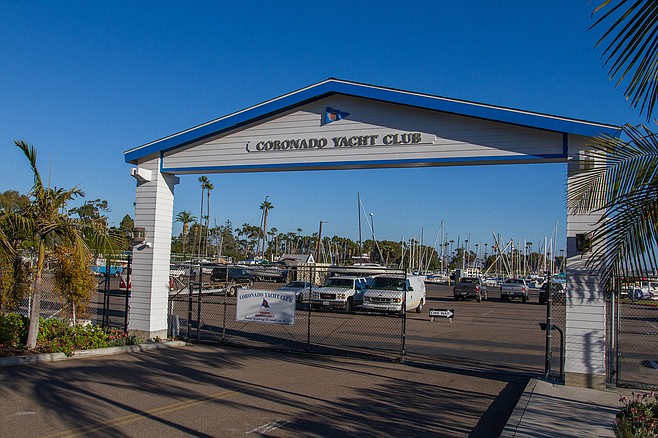 The club would prefer to keep the public off its property.

The current yacht club clubhouse is a remnant from another time. It consists of two World War II-era WAVES (Women Accepted for Volunteer Emergency Service) barracks that the club purchased from the Navy over seven decades ago. In 1947, these two structures were combined on the Glorietta Bay property and have served as the organization’s clubhouse since. If you take a peek at the clubhouse through the black chain-link fence on the western edge of their property, it’ll be obvious why they are seeking to replace this structure. The old and weathered barracks don’t exactly scream yacht club hangout. This isn’t the type of structure that typically comes hand-in-hand with a $2500 initiation fee followed by an $185 monthly membership fee.

But demolishing the aging clubhouse and building a new one comes at a price, and in this case that price has nothing to do with construction costs. According to Herron, the yacht club has the money to cover those — the key is to make sure they have the property secured for the long term before they kick the project into gear. The real cost at play here could be an end to exclusivity. The public’s ability to trot through the club’s property could be a new headache for the club to deal with, but it’s one that the Coastal Commission has deemed necessary if they wish to remain in their location. 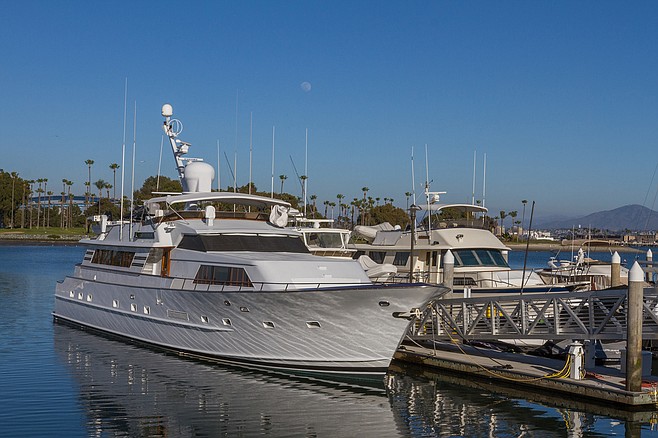 The club occupies the northwest end of Glorietta Bay.

In a letter to the yacht club from March of 2018, the Coastal Commission expressed concern regarding the lack of public access. It states, “The existing structure is located on public tidelands, yet has historically blocked any physical opportunity for the general public to access the site. The lack of public pedestrian shoreline access on the site is a serious inconsistency with the policies of the Coastal Act and the Port Master Plan. Redevelopment of the site presents the opportunity to extend public access along the shoreline, consistent with the Coastal Act and Port Master Plan, and should be a priority.”

In a December 19 opinion piece published in the Coronado Eagle and Journal titled “Three Coastal Commission Strikes, But Do Not Count Coronado Out,” former Coronado Yacht Club commodore and current Coronado Councilmember Bill Sandke blasted the Coastal Commission for exhibiting poor judgment in their handling of three different Coronado waterfront issues. The first involved a public restroom that they shot down after they deemed the proposed location “too dangerous.” The third was a gripe concerning “the repurposing of sand excavated as part of the southern-most Hotel del Coronado master plan project.”

Squeezed in between the toilets and the sand jostling was an in-depth airing of grievances regarding the Coastal Commission’s on-going battle with the yacht club. It provided a bit of a cheat sheet as to how this battle is being waged behind the scenes. For example, the initial paragraph hinted at how a demolition and a renovation can be one in the same: “The second egregious example is the ongoing adaptation efforts at Coronado Yacht Club. The 100-year-old club is hoping to raise the height of its clubhouse by two feet along with the demolition of its World War II-era building repurposed from its prior use as a WAVES barracks and towed to its current location in 1947 from the shoreline at First Street and E Avenue. The new structure was designed to fit the Port District mandated rules reflecting ‘repair and replace’ in that the existing square footage, seating and uses would be maintained and importantly, the new building would have adequate plumbing, electrical, and of course elevation to take care of the projected sea level rise.”

The second paragraph detailed the conflict over public access. Sandke describes plans the club had to build a public park instead of offering the public walkway. “Even though the club had deeded significant portion of its water-side lease hold to create a public bayside park and vehicle parking lot southwest of its remaining leasehold, the Coastal Commission determined that it was not enough public benefit. In order to accomplish their adaptation, Coronado Yacht Club was expected to relocate the building location from historic waterfront location and to bisect its historical connection to the water and accommodate a public path that would dead end at the golf course.”

The third paragraph details potential dangers that could arise if the public walkway is installed: “This egregious demand was impossible to accomplish due to safety concerns of both the Junior Sailing program and the operation of two cranes as well as the obvious folly of placing a public path in the same flooding areas necessitating the adaptation project in the first place. The standoff continues as the tides rise higher. Once again, the stated goal of adaptation takes a back seat to demands for already provided and sufficient adjacent public access.”

And that’s where this issue stands. It is still a stalemate, with neither side getting what they were hoping for. The old clubhouse remains intact, and there’s still not pedestrian access to the property. The yacht club’s new lease clears a path for this situation to stay this way until 2023, and perhaps longer if the port decides to issue more short-term leases to the club.

Melody Lasiter, a program analyst with the Coastal Commission, offered a brief ray of hope at the end of our email exchange. She stated, “We have recently renewed discussions with representatives of the yacht club and are hopeful that this coordination will result in a project that allows for both redevelopment of the clubhouse and public access through the site.”

As for Herron, he thinks the property should be opened up to the public. He also mentioned how the port and Coastal Commission could have benefitted by signing on a new tenant. This will be trickier now that the club is locked in for close to four more years.

“I think somebody could come in and bid for the facility and put up the money to build a new clubhouse and make it a public marina. And the people that have their boats there now could keep their boats in the public marina, just like every other marina around here. That would eliminate the problem with the Coastal Commission, and the money the yacht club raised to build their clubhouse could be returned to the members, and the person who comes in to take this on with a long-term lease could be responsible for building a new facility,” he said.

It is heartwarming that the wealthy have such weighty problems. I can't imagine how stressful it is for the members not to have a new clubhouse.

Like with the German U-boat flotillas, I say "Sink 'em."