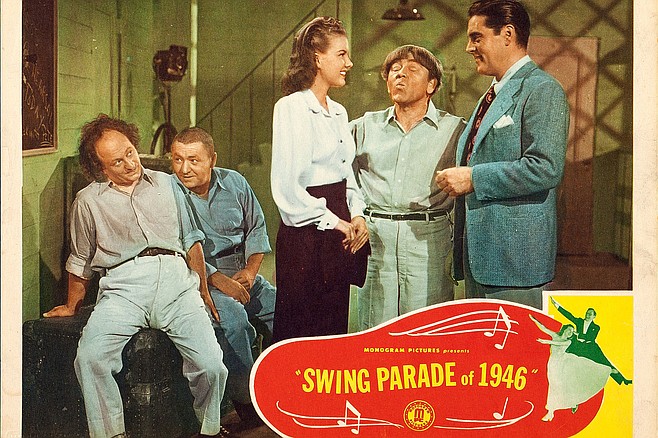 The Stooges were among the first recyclers

A pair of backstage musicals both old and new.

New to blu-ray, this affectionately bunched bundle of backstage musical cliches plays like a smaller-scale musical mock-up of La La Land that transfigures New York into a candy-colored bactericidal backdrop. If gumption had a name it would be Barlow Bennett (Juliet Doherty), a ballerina in waiting, earning cash as a telemarketing disaster. During an audition, star choreographer Zander (Thomas Doherty, no relation) capriciously calls a group of dancers forward, leaving Barlow behind, before proceeding to send the front line packing. Charlie (Harry Jarvis), the third tip of the romantic triangle, is a nosey, bicycle-powered restaurant delivery boy who, while waiting for his tip, pulls up a nearby piano — much to the delight of its reclusive owner (and future inspiration) Madam Rose (Kika Markham). No one bats an eye when chauffeur-powered Zander tails Barlow on her way home from acing the audition, and it’s here that the trio literally makes contact as Charlie is waylaid while rounding a corner. A lot can happen on the first day of rehearsals: the choreographer can go from womanizing hit-and-run stalker to stereotypical chair-throwing egotist. The bruised bicyclist can show up with a bag of bagels begging for an audition. And our leading lady — a brand spanking-new shinebox waiting to be stepped all over — can raise the question, “Does it hurt to smile that much?” The musical numbers span jazz, contemporary, hip-hop, and ballet, and are all covered in pretty much the same fashion: start back, swoop in, jump cut to overhead (space permitting), return to low angle, repeat. Directed and co-written by former The Young and the Restless mainstay (and San Diego native) Michael Damien, and given his background in soaps, it would be hard to suppress a few bubbles. According to his second-in-command, the hot-headed Zander, “doesn’t mean to be insensitive; he’s just so insanely gifted that when he’s creating there’s no more room left in his brain for anything else.” The picture climaxes in a prolonged series of staged musical numbers that would feel right at home as a Fathom event. I dare not reveal the All About Eve reversal that opens the third act, but it’s a doozy, proving this decided step down from Step Up wasn’t all for naught.

One of the few times the Three Stooges worked for a studio other than Columbia. (Why studio head Harry Cohn lent the boys out to Monogram for one picture remains a mystery.) This one boasts the combined talents of future Rebel-causer Nicolas Ray (additional dialogue), film noir specialist Phil Karlson (direction), and frizzle-top Larry Fine (standing around and getting slapped). A month behind on the rent, Carol Lawrence (Gale Storm) stumbles into the Embassy Club where she stands to pocket $50 if she can serve owner Danny Warren (Phil Regan) with court papers. She instead hands him her eviction notice and, with the help of Howard, Fine, and Howard, the two fall in love. Isolate the scenes that include the boys, and it still wouldn’t amount to a Columbia two-reeler. (And not a very good one at that.) The Stooges were among the first recyclers; their career was a veritable landfill of reused routines. The plumbing gag here was lifted from Meet the Baron (1933), which was later composted for A Plumbing We Will Go. In addition to the Stooges, we’re rewarded with a couple of toe-tappers from Louis Jordan (“Don’t Worry ‘Bout That Mule” and “Caldonia”) and Connee Boswell’s soulful rendition of “Stormy Weather.” The latter spent her career singing from a seated position because of a childhood bout with polio. The news was kept secret from the general public, as evidenced by the manner in which her wheelchair is kept hidden by costume and camera placement. On a personal note, this marks the end of an era: unless there’s something I’m forgetting, this was the last short or feature to showcase the combined talents of the Stooges that I had yet to cover. Requiescat In Curly.