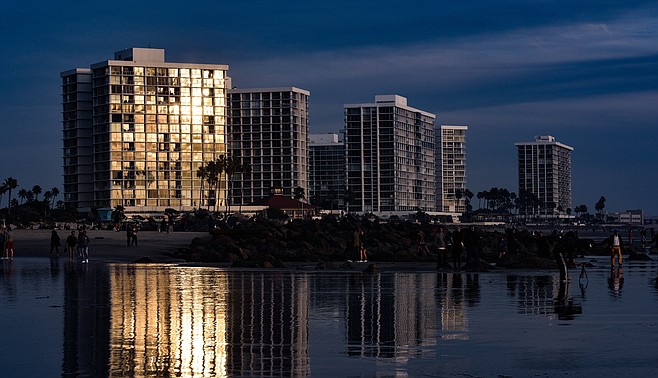 Maybe Coronado will become a beacon of tiny houses

How they will add 1000 homes without high-rises

Coronado, one of the county's smallest cities, can't see how it will ever meet its share of the region's housing goals. Home to two large Navy bases, the land-locked, built-out, high-priced city was allocated 1,000 new units.

On September 6, our region's planning agency, SANDAG, held a hearing to give the public one last chance to rally for revisions to the draft 2021-2029 Regional Housing Needs Assessment plan. Speakers from several small cities showed up.

To meet state housing targets, the county must build 171,685 new homes over the next decade. The issue debated was the formula SANDAG used to decide how and where to dole out units. It relies mainly on each city's jobs and access to transit.

"Even if you used the proposed methodology, I believe it's erroneously applied in Coronado's case," said local Pat Escher. "We are allocated 27,000 jobs, including Navy jobs." Jobs are counted on ships that are homeported "whether they're there or not." Two aircraft carriers with about 11,000 on board are at sea most of the time, and when they're here, many jobs are at Miramar and Lemoore.

While some had suggested the military build housing on their installations, SANDAG said the military isn't subject to state housing laws.

The second smallest city, Solana Beach, has sixty percent of the land governed by homeowner associations that will block development. Board member and Solana Beach Mayor David Zito called the formula "explainable but not defensible."

He previously asked for more factors than jobs and transit to be included to account for differences among cities, like the availability of developable land.

Chula Vista Mayor Mary Salas said her city "does have the luxury of creating a lot more housing." But in landlocked cities like Coronado, "building up is really a stretch with the constraints the Coastal Commission imposes."

Zito made a motion to adjust for the five cities with the smallest populations: Solana Beach, Lemon Grove, Imperial Beach, Del Mar, and Coronado – reducing their share by 55 percent.

"Almost, virtually everyone who has provided testimony today comes from one of the small cities," Zito said.

But the California department of Housing and Community Development, which must approve the plan the board will submit, already rejected a small-city adjustment, seeing it as a red flag when upper-income coastal communities try to get out of their housing allocation.

"Here's where we are excelling – in above moderate income levels," said Encinitas mayor Catherine Blakespear. "Methodologies are great. But thinking about the output is important." If the housing doesn't actually get built, "we're creating one more empty promise if we adopt this."

Cathryn Rodman, director of Affordable Housing Advocates, thought the wealthier cities should yield up their allotment of higher end units. Cities such as Coronado, Carlsbad, and Solana Beach are exceeding the above moderate income allocations, anywhere from 29-55 percent above the region average, she said.

"The law does require a low income allocation for each jurisdiction, but it doesn't require a moderate or above moderate allocation."

We need housing there is no argument there. We need affordable housing. By affordable I mean housing that people who work by the hour can afford. We also need low income housing. Low income housing should be for people on fixed incomes and the disabled. Low wage low/no benefit employers rely on the taxpayer to subsidize their profits by providing welfare benefits to their employees. In the future there will be a large number of people who lived and worked here all or most of their lives in San Diego (City/county) who will not be able to retire here because their employers did not provide a wage/benefit package that allowed the employee to financially plan for retirement. Having said that, the requirement that each city provide low, very low, moderate, and above moderate income housing fails to understand that people gravitate to areas that they can afford. The government should not force cities or neighborhoods to accommodate people that otherwise could not live there. I like Coronado, Del Mar, La Jolla, etc. and I like to visit and walk around and shop. I can't afford to live there. I was never able to afford to live there. I moved to an area that I could afford. I bought a house in a neighborhood. The neighbors came together and worked together to make the neighborhood the best it could be. I don't think I need to worry about someone from Coronado moving into my neighborhood. While the cost of housing is high the real problem is the historically low wages paid by San Diego employers. What the politicos that want to force low cost housing or mass transit on us should be considering is a poverty tax on employers who pay low wages. It is estimated that the taxpayer pays one large retail employer $1,000,000 per store in welfare benefits to their employers.

Well said , especially the part about employers doing more for their numbers er workers. Unfortunately the socially hip agenda is cultural enrichment and equal opportunity, and those pushing that agenda won’t be happy until there are ghettos everywhere.

I work at Walmart and have 0 extra $ after my mercedes lease payment and iphone payment, but I DO want to live on Coronado so so much!! So I think the State should force all those rich people to move, so affordable housing blocks can be built that I can afford with almost nothing! THANK YOU COMMIEFORNIA!!!

Those pushing cultural enrichment won’t be happy until there isn’t a nice area left . The fact is affordable housing equals trashy people.