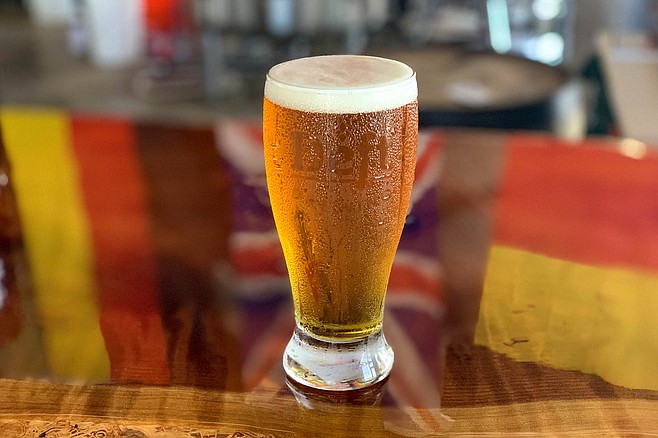 It’s September, and that means several of San Diego’s craft breweries have been gearing up for Oktoberfest, breaking out their German beer recipes and planning modest parties loosely modeled after Munich’s massive end of summer festival. Deft Brewing is one of them. The Linda Vista area brewery will be pouring nine different German beers for its so-called Deftoberfest weekend, the last weekend of summer.

That will be more German beers than usual for the brewery, but not by a lot. Deft is the rare San Diego taproom where German beers outnumber IPAs on the menu. “That’s what got me into beer,” explains Deft founder and brewer Mo Nuspl. A couple of college friends who majored in German studies introduced Nuspl to German imports, kicking off a lifelong fandom of European brews. “I’ve been drinking imports for a long time,” he says, “It was really more recently that I got into craft beer.”

Like many of San Diego’s earliest homebrewers, when Nuspl first started making his own beer, the first recipes he tried out were imported beers that weren’t always easy to get a whole of in the U.S. — at least not fresh. “I wanted to brew the things that I really liked back when I was first getting into beer,” he says matter of factly. He’s kept that up since starting his own brewery nearly two years ago, to the dismay of a few early visitors who worried over the unavailability of a hazy IPA.

But once word got out that Deft offered 12 taps devoted to German, Belgian, British, and Irish beer styles, a like-minded clientele started seeking Deft out. A list of Deft’s most popular recent beers includes a Belgian trippel, an English ordinary bitter, and a seldom seen anywhere German sticke altbier. These are hardly the types of beers generating buzz at most San Diego breweries, yet a cadre of Deft regulars swear by them.

These include German and British expats, who come to Deft seeking a fresh take on the flavor profiles they were accustomed to back home. “That’s why a lot of our beers resonate with Germans or brits who come in here,” Nuspl reckons, “There’s something to be said about brewing a beer that’s fairly true to style, but made local, fresh.”

Deft works with a variety of European malts, hops, and yeasts to better align with the traditional flavor profiles, and for Deftoberfest he’s been cold lagering a helles and a marzen for weeks in preparation. Aside from these Munich Oktoberfest favorites, he’s brewing a schwartzebier and dunkel weizen to go with German beers served near every day at his brewery: Kolsch, hefeweizen, and that sticke alt. he’s also collaborated with Miramar mead and cider makers, Lost Cause Mead and Serpentine Cider, to brew a honey kolsch and apple-weizen, respectively. Because, as he points out, as a San Diego craft brewer, he’s not beholden to reinheitsgebot, Bavaria’s famous beer purity laws.

Deftoberfest will be celebrated all day, September 21 and 22. And lest you think German beers have all the fun, Deft also organizes a Belgian Beer week in the spring, and is planning on a British Isles week for December.