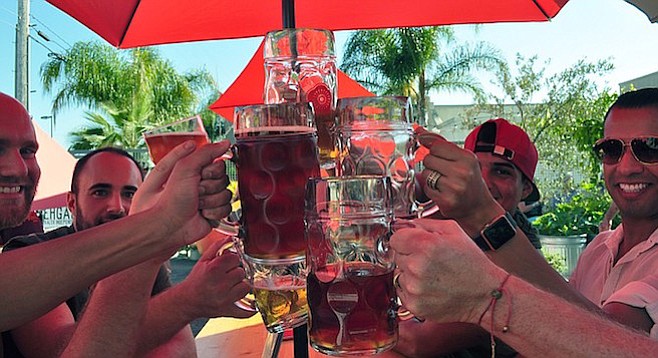 Märzen on the menu

Over in Munich, Oktoberfest started on Saturday, September 17th, and will continue until October 3rd, attracting an estimated six million thirsty souls to drink more than two million gallons of beer. As big as beer has gotten in San Diego, that's twice the number of people who live in this county, drinking about as much beer as our local breweries produce in a month.

That said, San Diego does love a good, scaled down Oktoberfest, and several events are planned to celebrate the occasion in La Mesa, El Cajon, Encinitas, Carlsbad, Ocean Beach, and the Gaslamp. Each of these Oktoberfests actually take place the first or second weekend of October. However, a few places did observe the traditional German start time, the third weekend of September.

One of these was ChuckAlek Independent Brewers. ChuckAlek opened an Eastern-Europe inspired Biergarten this year, so it makes sense it would host an Oktoberfest. The brewery brought in lederhosen-wearing musicians to play traditional Bavarian oom-pahs music, invited neighboring restaurant California Tap Room to serve its Munich-style soft pretzels, and poured traditional German beer styles in liter-size glass mugs.

The beers included Flycaster Helles Lager, one of ChuckAlek's core beers. The other was an Oktoberfestbier, a seasonal made in the Oktoberfest tradition.

As the story goes, drinking mass quantities of beer for Oktoberfest reflects a medieval tradition born out of necessity. German brewers couldn't make clean beer during the hot summer months, so they made a surplus in Märzen — the month we refer to as March — to make sure there was plenty of beer to drink until fall.

At the beginning of autumn, when the weather cooled, brewers would start brewing fresh beer again, meaning any remaining casks of märzen beer needed to be emptied. Basically, we can imagine the people of medieval Bavaria having a big party in order to kick the keg.

Oktoberfestbier grew out of this märzen beer style, and though modern refrigeration and brewing techniques mean the amber lager may be brewed any time of year, it usually shows up between September and November. Breweries including Karl Strauss, Gordon Biersch, Societe, and AleSmith make it locally.

ChuckAlek's take sticks with regionally authentic ingredients, using a blend of Munich and Vienna malts, plus Hallertau hops. The hops provide more nuance than bitterness, used more to balance the beer's malty profile, which reads bready with a little nuttiness and hint of caramel. The resulting beer perfectly matches the onset of autumn. And it drinks easy enough to quaff from that liter stein (a little over 32 ounces in American terms).