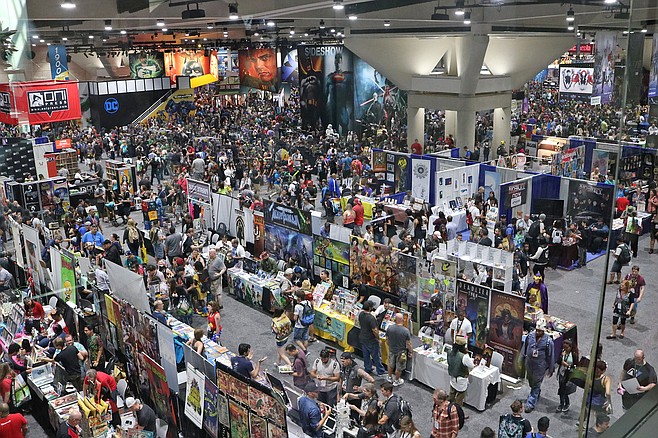 Insiders point to DC's down year

If the death of Horton Plaza and the slow failure of Seaport Village have proved anything it’s that nothing lasts forever in downtown San Diego. Now some say Comic-Con, another downtown institution, may be starting to show signs of decline.

Some attendees of July’s Comic-Con needed a Bat-Signal to find DC Comics; others couldn’t find a phone booth or WiFi signal to locate and tag Superman. 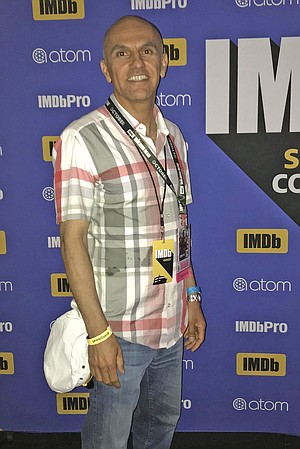 “Where was DC Comics?” asked 45-year-old Ash Yousif. “They are usually in the middle, by their nemesis Marvel Comics. Was there kryptonite in the middle aisles this year?”

At the “Noc-Cimoc 9102” — which in the backwards Bizarro World of the DC universe, translates to “2019 Comic Con” — DC Comic fans such as Yousif were confused and concerned for the 80-plus-year-old publishing company named after Detective Comics. Yousif, like many, did not get DC Comics’ memo posted on their website two weeks prior to the pop culture and comic book event at the San Diego Convention Center. 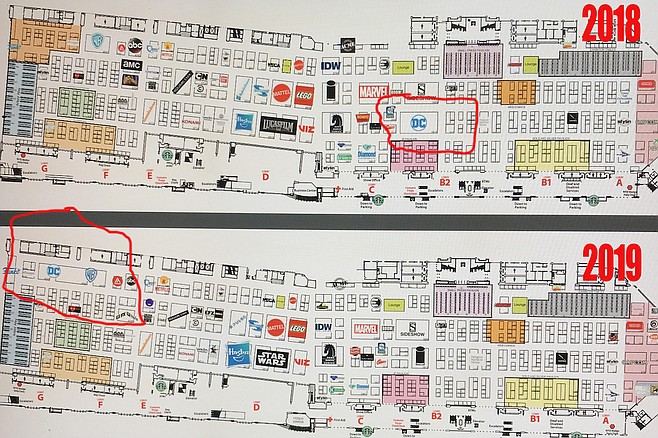 After facing down its bitter rival Marvel in 2018, DC ran and hid behind its parent company Warner Bros. in 2019.

“If you’re looking for anything to do with your favorite DC superheroes, whether they’re in comics, film or TV, booth #4545 is the place to be,” said DC’s website. “For the very first time, DC and Warner Bros. are combining their booths into one big (6,500 square feet across two levels) ….”

“Ohh, that’s why I didn’t see them,” Yousif said as he was driving to a real estate client’s home. “Location, location, location — they (DC) must’ve saved money moving there; the Hall G corner might be cheaper compared to their abandoned front-and-center spot between the B2 and C halls.” 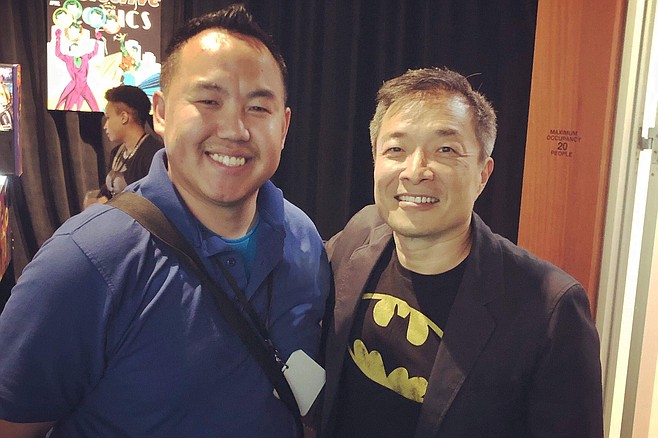 Yousif is a former comic shop owner turned real estate investor; he’s been buying and selling at the Con since “The Death of Superman” hype in 1992.

Yousif and his buddies had six booths at the convention. He says he still has withdrawals from working and walking the 2.6 million-square-foot venue with 135,000 fellow attendees and dealers.

“Usually Hot Wheels brings one of their life size, DC Comic-inspired vehicles — like the Batmobile,” Yousif said, “but not this year. Being its 50th anniversary, you’d expect enormous displays that wowed people, I only remember seeing the giant Gundam robot and the Star Wars booth ….. Mike, now I’m having a case of FOMO” — fear of missing out — “after you told me DC Comics was on site.”

Billy Khang found the shared booth of DC Comics and its parent company Warner Bros., in the southeast corner of the venue by ‘Artist’s Alley’ and the Funko booth. He took a photo with Jim Lee, the chief creative officer of DC Comics.

“For DC, it’s been a bad year,” Khang says. “Shazam! underperformed for them at the box office, and their DC Universe stream has been sort of a disappointment.”

According to Forbes, Shazam! grossed a total of $364.3 million since its release in April, while the initial investment to produce the movie was reportedly $100 million. DC Universe is a streaming service that enables the $7.99/month subscriber to access digital comic books and DC Comic-inspired films, TV shows, and merchandise.

Khang’s been a Con attendee since 2012. He’s originally from Linda Vista but transplanted to Imperial Valley for his job as a news reporter at KYMA-TV.

“This Con was a chance for DC to be part of the conversation again,” Khang continued, “and fans need to know that they’ll be rewarded for having faith in the DC brand. They have some of the most iconic pop cultural characters — including: Batman, Superman, Wonder Woman, Aquaman, Suicide Squad, Flash — in their pantheon, but we won’t see them for awhile.”

Khang was referring to Warner Bros. and DC not making a superhero movie cast appearance at the convention’s Hall H where they’ve been continuously presenting since their Batman Begins panel in 2004. The notorious 65,000-square-foot hall is where fans wait in lines for hours, and sometimes days — in hopes to catch a glimpse of actors and actresses on a Q&A panel, and watch teasers or pilots of the soon-to-be-released movies.

“DC (and Warner Bros.) not repping at Hall H was a huge misstep,” Khang continued. “Even if they had a trailer from Wonder Woman 1984, or a sneak peak of the new Joker movie, or having someone discuss their plan for the next slate of DC films, or even bring up James Gunn for the new Suicide Squad movie — they needed the buzz to be relevant again, and they missed it. Plus, there’s still no word on Henry Cavill reprising his role as Superman. This is why DC films don’t come close to Marvel films.”

YouTube vlogger and DC fan, Dingus Bringus, broke it down further on one of his vlogs. “The main point is money,” he said, “it’s pretty expensive to go to San Diego and have these huge panels. And seeing that Warner Bros. didn’t have a huge box office smash [in 2019] — Shazam!... made three or four times its budget, but it didn’t make huge smashing blockbuster numbers …. and Godzilla: King of the Monsters, as we are seeing is not performing all that well — so it really didn’t help those two movies being at Comic-Con last year. So I would understand why they wouldn’t want to spend a lot of money for Comic Con to promote smaller budget movies like Birds of Prey and Joker.”

Jay doesn’t buy it. He’s been a comic fan since Lynda Carter portrayed Wonder Woman in the late 70s, and he has attended Hall H panels when one could just stroll inside. On July 20, he was outside Hall H waiting to enter the Star Trek: Picard panel.

“The actors and actresses have promotional appearance obligations in their contracts,” he said “… and most of them live in Los Angeles, they can drive [or be driven] down and go back up in the same day.”

Like Yousif, Jay said, “for it being the 50th anniversary, there was no ‘wow’ factor and the panels this year, were lackluster.”

When DC Comics combined booths with Warner Bros., some dealers were displaced throughout the convention center. Many thought that moving dealers to other areas might impact sales in a negative manner, because their regular patrons might not be able to find their booths.

“We were moved, as was everyone around us,” said Scott. “We we part of the designer toy area, [which DC/Warner Bros. moved into].”

Scott is the co-owner of Disburst Ltd., a distributor of vinyl and plush toys, pins, patches, and shoes. Their 2019 location was at #2645 — behind Lego and Mattel.

“We were up 54 percent in gross sales over our best year,” Scott said on September 4.

“What are factors that might have increased your sales?”

“[DC Comics moving,] removed the logjam of foot traffic in the middle of the show floor and allowed far more people to get to our booth without being frustrated by crowded areas not moving and leaving the hall. It fixed a traffic pattern that hampered show attendees from crossing from one side of the hall to the other and that a lot of the smaller vendors complained about. Everyone we knew with booths at the show, especially that designer toys booths, thought the move was great and sales were largely up.”

Yousif and his buddies usually sell DC Comic statues, including those casted of Sandman, Death, Catwoman, Batman, and Superman — for $50-$300 a piece at the conventions. He attributes their “slow show” this year to DC Comics not being closer to their booths by the A and B halls.

“It’s cliché I know, but it felt like we were in the Bizarro alternative storyline,” he says. “People weren’t really buying as much as they used to. I believe the last count was 50 percent lower than 2018 — people weren’t buying our DC comics and trade paperbacks, even at 50 percent off.”

Yousif remembers when Superman came back to life and DC Comics sealed The Adventures of Superman #500 comic in a white bag — “we all rejoiced at the 1993 Con that year.”

Back in the day, it was common for attendees to lug around their 150-count comic boxes in the halls. Up until last year, Yousif and his buddies sold “literally tons” of comic books and trade paperbacks here. They hauled them in on pallets. Word on the San Diego streets is that the lottery ticket system to get into the Con results in more attendees that don’t collect and spend less than the previous generations.

“You didn’t see many people carrying around boxes of stuff they purchased,” Yousif said. “I think the Con has become more of a destination for experience, rather than a show to purchase your back issues and rare collectibles. It’s apparent on the surprise boxes that sell for $50 a box.”

Yousif is referring to various vendors that sell boxes or giant plastic eggs — filled with miscellaneous merch — with one or two high-dollar items hidden inside random containers.

“In this type of merchandise that sells for $50 a pop,” he said, “it’s an experience to open them, but they have no collectibility whatsoever — most of them Snapchat or Instagram themselves opening it, one girl cosplaying as Catwoman asked me to film her.”

Scott brought thousands of items to sell within his two booths. His catalog boasts over 10,000 different items; many were made within the last year.

“The problem with vintage dealers is that the show in particular has trended in recent years to more and more of a show about what’s “hot and new” — the whole movement of the consumer from bound-and-printed matter, to products like flair — pins, patches, etc. So, I’m not sure the floorplan change [with the DC Comics booths], had any impact on that.

I think Comic Con is in more danger of outgrowing the convention center. San Diego leaders, past and present, have always thought small.