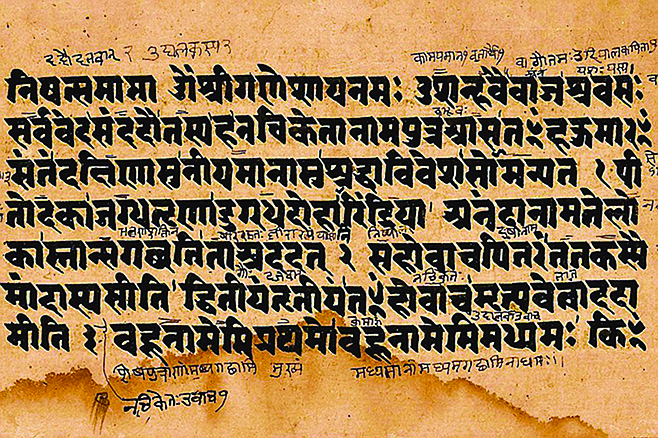 The Katha Upanishad: self-knowledge is the highest form of happiness in Hinduism

Nachiketa said: That which you see as other than righteousness and unrighteousness, other than all this cause and effect, other than what has been and what is to be−tell me that. Yama said: The goal which all the Vedas declare, which all austerities aim at and which men desire when they lead the life of continence, I will tell you briefly: it is Om. This syllable Om is indeed Brahman. This syllable is the Highest. Whosoever knows this syllable obtains all that he desires. This is the best support; this is the highest support. Whosoever knows this support is adored in the world of Brahma. The knowing Self is not born; It does not die. It has not sprung from anything; nothing has sprung from It. Birthless, eternal, everlasting and ancient, It is not killed when the body is killed.

– from the Katha Upanishad

The Katha Upanishad is one of the central Upanishads – ancient Sanskrit scriptures – and tells the story of Nachiketa, a young boy who meets the Hindu god of death, Yama. The conversation that ensues focuses on the nature of man, his soul, and his ultimate fate in the afterlife. The work is an important witness to belief in the existence of the human soul and that self-knowledge is the highest form of happiness in Hinduism – in contrast with the Buddhist assertion that the soul does not exist and that one achieves the greatest happiness in nothingness.