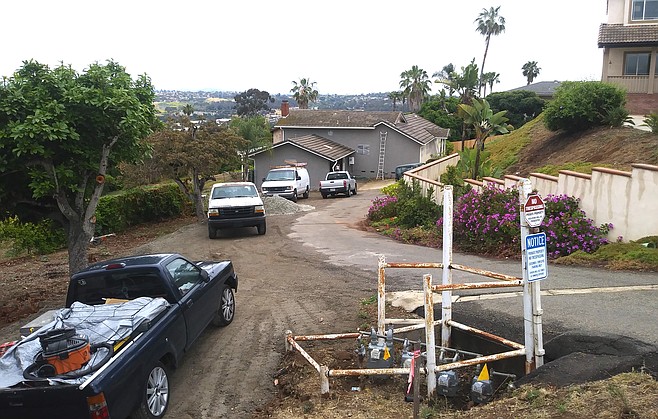 A meeting in Fire Mountain about David Fischbach

Twenty homeowners met May 9 in a living room in the upscale Oceanside Fire Mountain neighborhood. They weren’t carrying pitchforks, but they were fuming, outraged that an aggressive entrepreneur with a dubious history was building two sober living facilities in their rustic backyard. Fire Mountain homes often resell in the $1 million to $1.2 million range.

They were mobilizing against Dr. David Fischbach, a retired anesthesiologist who lives in Rancho Santa Fe, who they say was up to his dirty tricks again, this time with two Fire Mountain homes he purchased at 2588 and 2592 Yucca Road. They said in that meeting that he was quickly remodeling them, building new bedrooms without permits.

“He lied through his teeth to me,” said one neighbor. “He kept working even though he had a stop-work order from the city,” said another. “They’ve taken a crown jewel of a home and made it into a fortress of people up there,” said a third. “And there’s no place for these people to walk to. There are no stores up here...My kids are playing in the backyard next to these people.”

Fischbach says no one needs to worry. “We are looking for nice families to live there.” He says people are simply wrong to assume that these remodels will be like his other sober living homes or his beachfront short-term rentals. “One neighbor started that rumor. Don’t listen to rumors.”

But Development Services director Jonathan Borrego who oversees all planning and building issues for the city of Oceanside says code enforcement officers have had to go to Fischbach’s Yucca Road homes every day for two weeks straight to make sure he was not making illegal additions. “There was work being done that was not permitted. We do take a stop work order very seriously.”

Fischbach operates some 85 vacation rental properties in Oceanside. His company Beachfront Only occupies the building that once housed the closed Fresh and Easy building on Oceanside Boulevard and is filled with furniture and stacks of building plans.

But it is Fischbach’s history with sober living facilities that have have led to confrontations with neighbors who claim he illegally remodels single family houses and overwhelms neighborhoods with too many cars and residents.

“I live directly across the street from his project on Oak Avenue,” says Bill Bowden, a retired fire department captain who has lived in the Olde Carlsbad neighborhood for almost 30 years. “Fischbach had one house then he built three more on that one acre on the 1200 block of Oak Avenue. His project manager even showed the plans to my wife and I for these three custom houses.”

Bowden says the homes that got built had no resemblance to those original plans. He said each home is connected with two granny flats, one legal, and one illegal. “Every day while he was building them he went to the city and made little changes. That’s what I was told by the city. Nobody caught on until he was all done. By the end, he had changed them from single family homes to four apartment buildings. I went to the director of engineering [for Carlsbad] and he told me that Fischbach and his people moved so fast that they couldn’t keep up with him.”

Those four buildings on Oak Avenue are now part of Sober Living Today, LLC. Neighbors who live nearby say they expect new Sober Living homes to be opened by Fischbach in two houses he also owns on Pine Avenue.

Bowden is amazed how Fischbach continues to turn single family houses into multi-person recovery homes. “He somehow is always protected by the city. He once moved his sober living residents to one of his short-term vacation rentals so that he could remodel the buildings to avoid being caught by code enforcement. After that he was busted so he was inspected monthly by the city. When the inspections were over six months later, he moved residents back in. I notified the code enforcement of the reoccupation of the illegal units but there was no action for two years. Now they say its not a problem.”

Like Oceanside’s Fire Mountain, Bowden’s Olde Carlsbad neighborhood has many homes that are worth seven figures. He says he and his wife are constantly reminded that they live next to the residents of Sober Living Today. “They would come and sit on our planter in the front yard and rub their cigarettes out in our brick wall. There is so little parking they would park across driveways. We’ve had to call police a number of times.”

But whatever he does, Bowden says Fischbach gets away with it. “The city is afraid of him. There was a meeting I was in with [former assistant planning director and now deputy city manager Gary] Barberio and when I brought up that Fischbach seemed like he was protected, he was noticeably irritated and said he had to go to another meeting.”

The Coast News quoted one neighbor of the Fischbach’s Pine Avenue properties named Martha Law Edwards: “We have a house that is seven beds, nine baths with only two garages. [Fischbach] is a predator.”

One neighbor who lives near the Fire Mountain properties but who did not want to be quoted says he is convinced the Yucca Road homes will end up being sober living houses eventually. “These things can be big money makers. I mean is he going to get $4500 a month in rent from a single family or is he going to get $2000 from each recovering addict. That is what they get to house these parolees. That’s ten grand a month.” He says one of these houses on Yucca Road recently “…had four or five refrigerators in the garage and tons of bicycles. What does that tell you?”

In attendance at that May 9 living room meeting was Oceanside city councilman Ryan Keim who assured the irate Fire Mountain neighbors that his city was doing everything it could, but that sober living homes are currently protected by state law. Cities are limited over what control they can have over their own sober living homes other than to make sure there are not more than six residents per home.

Yet there is one hope for neighbors who feel beat down by unregulated sober living homes. In December a jury of eight found that the city of Costa Mesa could in fact regulate its own sober homes. Costa Mesa enacted an ordinance that mandated sober living homes needed to get permits from the city and that the residents must not have had records of arson, or violent or sexual offenses. In court Costa Mesa claimed the neighbors had to regularly deal with noise and needles. If that case holds up appeal in the 9th Circuit Court of Appeals, it could impact California's sober living industry.

Fishbach is a slime ball that is protected by the State. It is the State that mandates that cities can not regulate these "sober living" homes. While well intended the law ends up making slime like Fishbach wealthy while destroying neighborhoods.