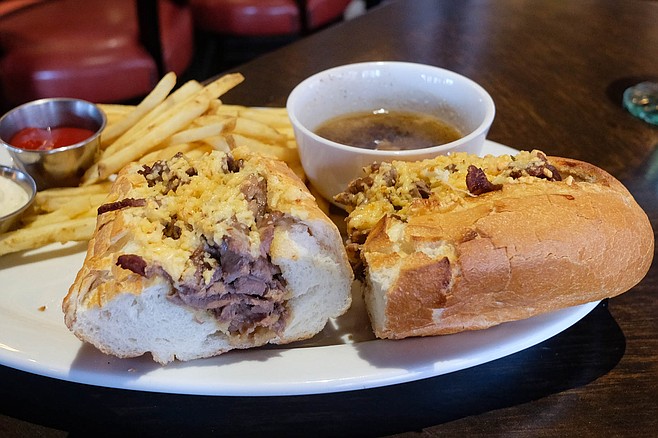 Steak with benefits at Lou & Mickey's

Because of its plum location across the street from the Convention Center, at the left leg of the gateway arch welcoming visitors to the Gaslamp Quarter, prime steakhouse Lou & Mickey’s struck me as a tourist-facing restaurant. But it did something recently that changed my mind: installed its own dry-aging room.

Found in the back right corner of Lou & Mickey’s old-school elegant, wood-finished dining room, the glassed-in cooler offers patrons a window into the aging process of primal cuts of beef, en route to becoming prized 30- 45- and 60-day aged steaks. On shelves within the acculturated, climate-controlled room, specially selected airborne microbes form a protective crust on the surface of two-foot long blocks of ribeye, porterhouse, and sirloin steaks, allowing their beefy interiors to become denser, richer, and more tender as protein chains break down muscle fibers into more palatable meat. 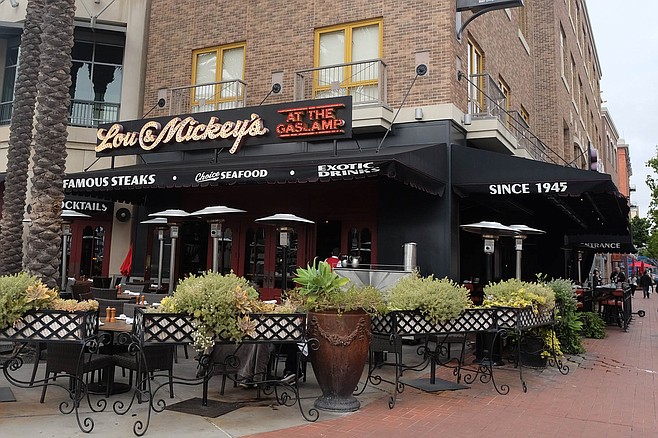 Prime steakhouse next to the Gaslamp Quarter gateway arch

To accomplish this, all beef is aged one way or another prior to turning up at a grocery store or on your plate. The more conventional wet-aging process is faster and cheaper, closer to 10 days or two weeks, and like most cheaper processes, yields lesser results. Dry-aging is slower and riskier, yet more rewarding the longer it goes. The Lou & Mickey’s room must be kept around 35 degrees, at 85 percent relative humidity, and if those conditions change, phone alerts go out to the restaurant’s chefs and managers, because thousands of dollars’ worth of prime beef are at stake. 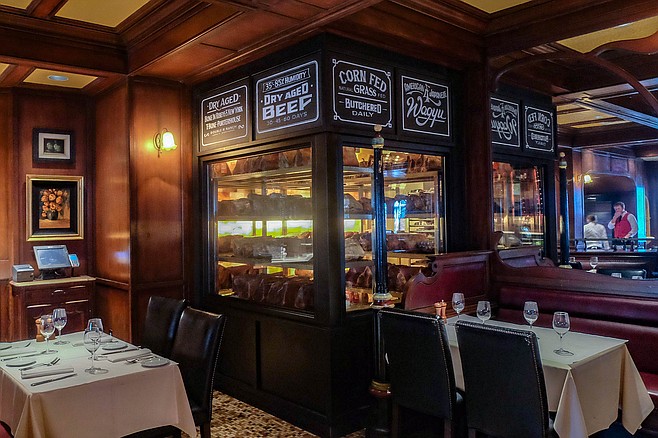 When the primal cuts have properly aged, their crusts are trimmed and they’re butchered into steaks on site, with different-sized offerings served at 3 to 4 dollars per ounce. At $3.25 and ounce, a 16-ounce serving of 30-day aged bone-in ribeye would be $52. At $3.60, a sumptuous 60-day porterhouse of the same weight still comes in under 60 bucks, and worth every penny.

However, while not unreasonable in prime steak (and real estate) terms, these remain special occasion prices for most of us. Fortunately, rather than wait for my birthday to roll around again, I found a place to enjoy the quality of Lou & Mickey’s aged on-site beef at a lower cost: its lunch menu. 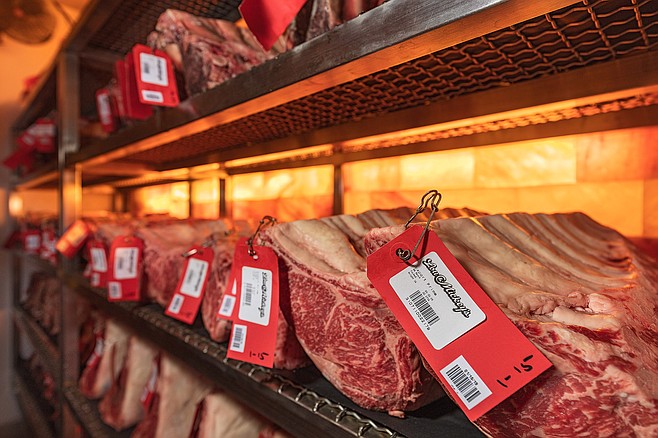 See, wherever prime beef is butchered, there are prime beef trimmings left behind for the kitchen to turn into delectable bargain dishes. Consider Lou & Mickey’s meatballs: assembled from the trimmings of prime ribeye and New York steaks. You may order them as an appetizer with gouda and gravy ($15), or on a sandwich with marinara and ricotta ($18).

Then there’s the $18 country-fried ribeye steak. They make these from the entrecote: bone-in ribeye steaks are cut flush to the bone with a band saw, which leaves thin steaks of boneless ribeye behind. It’s the same prime, 30-day ribeye you may order at dinner, just thinner, and battered.

The fantastic meatballs wind up the most flavorful, but my pick for a $20 lunch is the prime beef dip sandwich. Both the dipping broth and thin slices of beef in this sandwich are made from trimmings of Lou & Mickey’s aged New York Strip, topped with parmesan cheese, and served on a center-split, Italian-style, thin-crust roll. All this adds up to the finest au jus sandwich I’ve eaten downtown, something that I wolfed down in five minutes of ravenous glee, but should hopefully tide me over while I dream about aging steaks.

Yes. This is a great place to spend time with friends in a comfortable atmosphere. Love it

Someday the time will come when I will stop eating junk food, but how difficult it is to refuse this yummy.