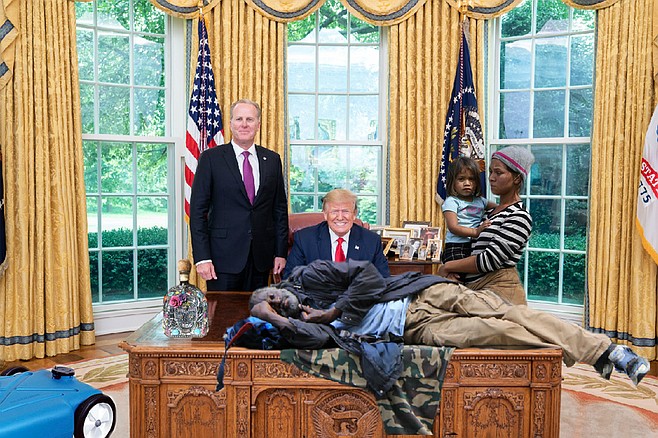 “What’s a good Republican to do?” lamented Mayor Kevin Faulconer as he surveyed his “3D Powerpoint” presentation for the President on June 18. “Starting from my right: the portable Blue Boy tank is full of sewage-tainted water that sneaks into American waters from Mexico despite all your efforts to secure the border. And it’s not just threatening the surf rats in Imperial Beach any more; it’s gotten to the point where even the rich, I mean good people of Coronado are having to worry. Who’s going to believe in your ability to stop immigrants from shithole countries when you can’t even stop their shit? And while I know you don’t drink, Mr. President, it’s surely worrying that this bottle of El Gringo Malo tequila will go from $200 to $400 a bottle at Gaslamp nightclubs should you carry out your threat to impose trade tariffs as a response to the immigration mess. Those booze-addled youngsters are the future of America, sir, and someday, they might even vote. You want to try to explain foreign policy to some Biotech Bro who just wants to do shots and get his swerve on? I sure don’t. Speaking of the immigration mess, over here on my left are a couple of Guatemalan migrants who have been attracting a lot of press attention with their hunger strike as they await processing. Well, it’s more that they’re just not getting fed while we detain them, but the net result is the same. I’m the face of the Republican Party down in the southwest corner of our nation, and from my understanding, it’s a face that’s looking less electable to state- or nation-wide office all the time. Finally, I’d like to call your attention to Nate the Napper, currently snoozing there on the Resolute Desk. Nate is just one of the many people who, despite being homeless, call San Diego home. People like Nate are a walking photo op for your opponents, whether they want to highlight the plight of abandoned vets, the victims of the opioid crisis, the death of the middle class, the shredding of the safety net, the evils of market capitalism, or just your failure to Make America Great Again. Thank you for your time and attention; I’ll see myself out.”

Fake News from Trump's man at HUD and the boot-licking, sycophantic MSM (Yes, that means you Fox News). You see this a lot in California. RINO's defecting like Vichy cowards in WWII, and then supporting, with outright lies, such muddleheaded programs, all while being feted by the complicit, activist minions (calling themselves journalists) in the media. Maybe San Diego's RINO Mayor Faulconer said something in his short meeting with Trump that aroused the developer/banker in the president. Now this is a New $Green Deal! Taxpayer subsidized, private development. The public/private partnership that socializes costs/losses onto the taxpayer and privatizes profits to the developers while bulldozing and rolling over long term self-governance. It all starts in California; boom and bust, boom and bust. Wash, rinse, repeat. Also, the eradication of any meaningful Republican Party or loyal opposition. Boom. Gone. (Why was this not covered in the media locally? Hmmm.)

What a nice 4th of July gift Mr President! A pogrom against the everyday, hard working, tax-paying citizen. The contradictions in this thinking are jarring. Let in millions of low skilled, alien migrants and refugees from costly wars we initiated, which displace poor Americans from the tax-supported social safety nets (jobs, housing, medical, education) and then claim there's a housing shortage. There was no housing shortage during the Obama administration just three years ago. In fact, there were images on the front page of the Wall Street Journal showing NEW homes in California being bulldozed. The only way to absorb the surplus housing stock was to pay Wall Street hedge funds, with taxpayer money, to buy them up on the cheap.

The free flow of dollar printing and artificially low interest rates, coupled with past easy qualifying for federal loans (Freddie/Fanny) under the Democrats (Clinton, Frank, Dodd, Obama and others) has done it's intended work of profits to the bankers, losses to the public. Re-inflating the already overpriced housing market from 2007 just repeated the transfer of wealth from the poor to the elites. Similar to pay-day loan schemes. Governments at all levels make out on this from higher net property tax revenue. California is swimming in tax surpluses and yet can't cover the costs of pensions, education, health, infrastructure (like water storage, waste/border sewerage and Point Loma treatment facility, parks, etc.) or transportation issues (high-speed rail anyone?) Water projects delayed by strong-arm labor tactics. Yada, yada, yada.

Billion$ divvied up by CA lawmakers to address housing and homeless.(https://timesofsandiego.com/politics/2019/06/29/lawmakers-divvy-up-2-billion-to-address-californias-housing-and-homeless-crises/)

Toni Atkins partner Jennifer LeSar making out in spades. (https://www.latimes.com/politics/la-pol-ca-toni-atkins-spouse-housing-contracts-20190404-story.html) The LGBT+ mafia steering big bucks their own way and to their developer overlords as they consolidate power in Sacramento and locally via political musical chairs. (With help from local PR firms masquerading as 'think tanks', internet 'influencers', SJW activist calling themselves journalists and other such upstanding citizenry.)

In order for the U.S. Treasury to recoup the value of the housing stock on it's books (and Wall Street to make outsized profits), the prices must be held artificially high. No true price discovery and/or market clearing and an artificial stimulus for another building boom that's not market driven nor needed, all the while excluding what was once a middle class, now relegated to low income status by the miracle of monetary policy and financialization. This is a corrupt taking of local land use rights (zoning/environmental), a betrayal of self-determination, a betrayal of the 'old greens' (Democrats that promoted the many regulations now indicted as troublesome to development) and ultimately a road to serfdom with a guaranteed major bust after the stimulated boom. The damage will be permanently done; greater crowding, more traffic, more pollution, more noise, a degraded environment and destruction of the cultural character of long established neighborhoods. Trump will be gone by then, back into his developer tycoon habitat. He doesn't care, and neither do the California Social Democrats and their ilk.

The Wall Street/Banker crowd got loads of money (~$5T) directly from taxpayers and then bought up property on the cheap in 2009-2012. No local homeowners were saved; they were all foreclosed upon and evicted (many now homeless). The Wall Street crowd invented AirBnB and the "short term vacation rentals" to collect both rents and tax-benefits, tying up housing stock that often sits empty, and thus keeping the normal folks effectively out of housing due to cost constraints, loan scarcity and an artificial supply scarcity. Loads of foreign investors (buyers/bankers) are benefiting from this scheme as well, on the backs of the American and local taxpayers and savers, and the American families looking for homes. What a racket.

What was supposed to be temporary federal Quantitative Easing (QE) programs has recently been made permanent by the Fed's monetizing of this debt. The induced inflation (watch gold prices erupt) and currency devaluation is coming soon enough so medical, education, transportation, food, taxes, and yes, housing costs are all going to skyrocket much faster than any wages and/or salaries. The developers/bankers want to move quickly while their costs (labor/materials/financing) are low, and then sell to suckers at inflated prices while paying back their loans with a depreciated currency. Pretty slick. All while virtue signaling their laughable altruistic concern and do-gooder bona-fides. The rich getting richer and the poor getting poorer. This has plenty to do with Democrats and Republicans but mostly has everything to do with the haves and the have nots. The global and domestic political elites and their puppet-masters are all part of the same political kleptocracy working against the local, everyday citizens, no matter what their stripe. We keep voting them in, as there is no other choice when they play both sides! The definition of insanity is doing the same thing over and over again, expecting a different result. Don't hold your breath.

Block programs with cutesy tiny houses or pre-permitted granny flats, forced up-zoning of long established neighborhoods with under-utilized transit rationalizations or the ubiquitous Specific Plan designation, forced integration of mixed incomes, picking winners and losers with subsidized housing for the likes of fireman, police, teachers, nurses, doctors, construction workers (all union members who are doing very well already on the taxpayer dime, thank-you very much) over hard working, barely making it, private earners, and the goal of the integration of cultures (except of course American culture and language), have long been the purview of the authoritarian globalist, socialist, Democrats. It is now the stated goal of HUD and the Trump administration. We're all Socialists now.

Millennial's, Generation-Z, minorities, low-income and everyday folks should pay close attention to all this. You're being led around like zombies to be enslaved in the gulags of the new authoritarian overlords (read: wealthy, establishment Democrats and now Trump) while you have your pockets picked. It's on you to be responsible for yourselves, to understand the chicanery, deceit and outright manipulative lies of your ideologue leaders (both left and right) and the terrible outcomes you will inherit.

Thanks to the Reader for allowing public comment. At least this media outlet is engaged with the citizens. Unlike the local Pravda, KPBS, with their new logo, an empty thought bubble or is that an empty comment bubble? Whatever. Or the outlets that demand you either pay a subscription to comment or that you use the Stasi app Facebook.

Coda to rant above:

Isn't it telling that the progressive left has colluded with the Trump Administration to forcefully direct the suspension of established law and precedent, overriding federal, state and local rules in regards to the environment, property rights, zoning, permitting etc. by executive fiat.

The California Progressive alliance with big business, developers and Wall Street is no longer even attempting to hide their agenda. They have tried at both the local level and state level to force their pro-developer agenda down the throats of the citizens and have been rebuffed. Dispensing with established zoning such as minimal parking requirements, building heights and building density and forcing their way into established neighborhoods and onto public lands (like transit parking lots, public parks, school lands, old stadium/sports arena sites, community college property), has been their goal and now the Republicans are colluding and doing their dirty work for them.

Hiding behind climate change and GHG's as their raison d'être for the mass take over of every aspect of public and private life is the ingenious propaganda of the authoritarian megalomaniacs. What a bunch of control freaks who just want to be the bossy, in charge, queen bee's. What's so alarming is they are being allowed to get away with it to everyone else's detriment. We'll still be here 12 years from now but the damage from the progressive agenda will be permanent.

The local Progressives know their agenda is a losing proposition among a growing number of the fed-up populace who are paying ever more for less and less in return. The citizens eventually catch onto the tricks and lies and will respond in kind. The Progressives will then blame Trump. Ha!

WOW. That is a pretty long diatribe for for an article that is pure sarcasm. One can only imagine what you could write if it were an actual news article.