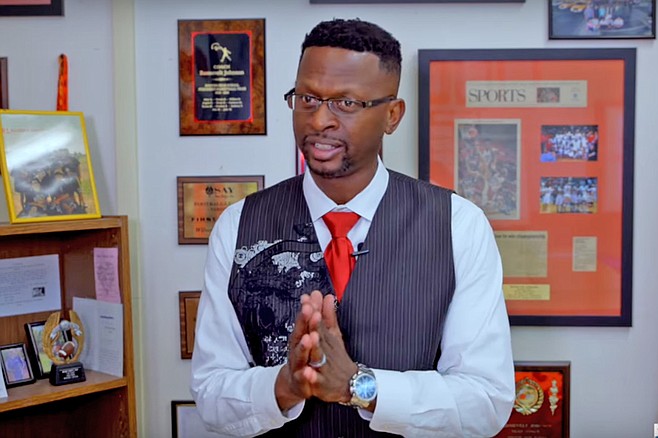 They enter his classroom and greet one another to the sound of rap music — the “Man Up Anthem” by Lecrae — “We need a remedy… a hundred percent masculinity. Where the men at? Seems like they all lost. None of them are on the scene, seems like they died off… But my dream is to rise up….” 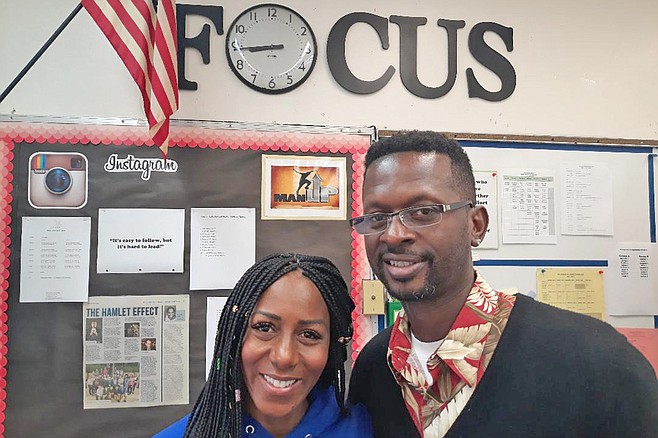 Johnson, with wife and fellow teacher Roushaun, says, “Sadly, [how to be a man] is not always taught at home.”

After several minutes Johnson’s voice rises and the music stops. “Ready!” The conversations throughout the classroom come to an immediate halt. “Ready!” The boys stand in unison and give a single clap. “Focus!”

It’s time for “Man Up,” a weekly school club Johnson founded eight years ago when he noticed an alarming number of boys were failing to graduate. 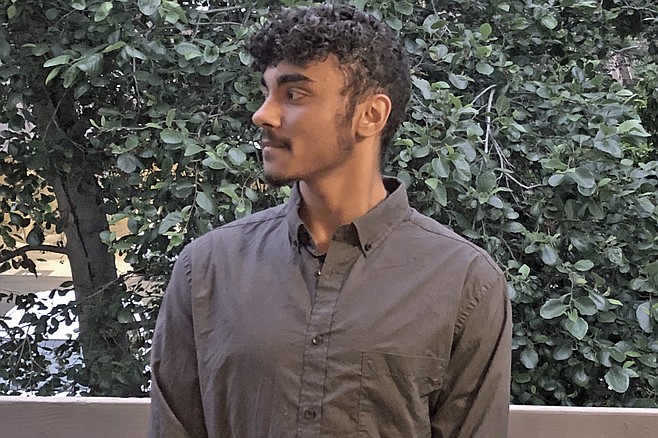 Jermelle MacLeod wrote in SDSU’s Daily Aztec, “No, ‘toxic masculinity’ does not exist.”

The club recites their creed. “We, the young men of Man Up, strive to become positive, productive citizens in today’s society… Integrity — the quality of being honest and having strong moral principles. Failure — is not an option!”

Johnson relies on guest speakers to keep the mentoring program going strong and introduce students to career options. He planned to have a barber friend do a presentation today, but car troubles keep him away.

So he switches gears to cultural awareness, a key topic in the club. This morning he begins the first in a series of discussions on the “Central Park Five,” a group of African-American and Latino-American boys who were falsely charged with rape and other crimes in New York City in 1989. Johnson will be showing scenes, appropriate for middle school viewers, from the new Netflix series about the story, When They See Us. 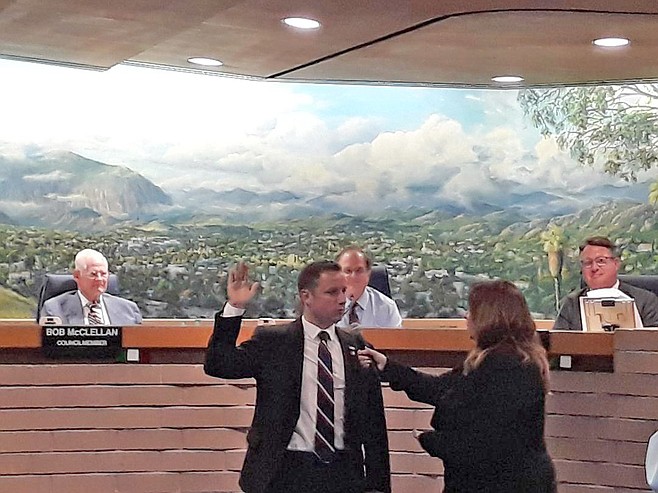 Phil Ortiz, new El Cajon councilman, says, “Maleness is not toxic. It is toxic to manipulate, coerce, bully, or threaten anyone; especially a woman or child. But I wouldn’t define that as ‘toxic masculinity,’ rather ‘immaturity’ or ‘toxic behavior.’”

Today he shows the scene of police interrogating the boys without their parents present. One student raises his hand and asks if it’s ok for police to do that. Johnson says no and asks the boys why they think that is.

“We’re easier to break,” says one. Johnson agrees. His voice reverberates his concern for his students. He says when a child with a still developing brain is put in a threatening situation like that “Police can make you say what they want. You’re going to say anything just so you can go home.”

It’s a timely lesson. Valencia Park Elementary School came under a spotlight June 3 when the principal reportedly called school police — before calling the children’s parents — about fake money children were playing with, which led to police questioning children without their parents’ knowledge or consent, as reported by NBC.

Johnson has been a math teacher for 12 years. His extra dedication mentoring boys the past eight earned him San Diego Unified School District’s 2018-19 middle school teacher of the year award.

A core topic in the club is masculinity, addressed last week when Johnson discussed what it means to be a real man.

Among the minority of educators who are male, and the 2 percent who are African American men, he realized he could meet the need boys have for someone to teach them how to be men.

“Sadly, it’s not always taught at home,” he says. He thinks of two former students, now serving life in prison, who he believes would have made better choices if they had a father figure in their lives.

Johnson emphasizes real men take responsibility. In his classroom respect is non-negotiable. And he wants his students to be ready for life’s challenges. “Failing to prepare is preparing to fail,” he tells them.

Other life lessons include “criminal consequences, effects of gangs and drugs, fashion, etiquette, and the importance of family.”

In a promotional video honoring him for his achievements, students refer to Johnson as inspiring, motivating, and fatherly.

I can see the impact of the club on their faces as each one shakes my hand before leaving the room, and I sense an unusual level of respect and maturity for their age. “I get a lot of gratitude from parents who see a lot of changes in the boys,” Johnson says. He doesn’t always get instant results, but of 200 boys who have gone through Man Up every one finished eighth grade qualified to graduate.

Though Wilson students have had positive experiences and results, not everyone sees the propagation of masculinity in a positive light. If Johnson took his message three miles to the east on El Cajon Boulevard and a mile north on College Avenue, he might be vilified rather than honored. “Man up” is a toxic message to many at San Diego State University.

Last fall the Daily Aztec reported fraternity members were required to attend lectures on hazing, alcohol abuse, drugs, and sexual assault as part of a remedy for rampant fraternity misconduct.

Added to the list of transgressions was “toxic masculinity.” And the phrase “man up” was included in a September 26 lecture on the topic. Fraternity members reportedly mocked this idea of the toxic potential within every man.

Jermelle MacLeod, a sophomore journalism student not involved with Greek life or the lectures, had his own gripe with the term. On March 13 the Daily Aztec published his opinion piece, “No, ‘toxic masculinity’ does not exist.”

Macleod wants people to stop using the term, which he says is meaningless and part of a war on men.

“In high school feminists called me ‘toxic’ and an ‘asshole’ whenever they could. I didn’t think much of it until I got to college and saw the feminist rhetoric being used everywhere to demean men.”

He clarifies he is not referring to original feminists who fought for gender equality but a modern aberration embraced by women’s studies majors who are all about “stepping on men.”

MacLeod laments their success in “discouraging men from being men.” He says, “Boys are falling behind in school and can’t express their masculinity unless it aligns with a feminist agenda. I want men to have their vigor back.”

He comes down hard on his fellow male students as well. “Fraternities are a horrendous example of masculinity.” In his view a majority of frat members are not men but “overgrown boys.”

MacLeod wants boys (overgrown or otherwise) to man up, by which he means “to embody... four virtues — strength, courage, mastery, and honor.” (By mastery he means mastering a trade or a set of skills “that make you unique and useful.”)

He says SDSU’s satire publication, The Koala, bashed him for sharing his opinion and disparaged the Daily Aztec opinion editor Kemi Giwa for allowing it to be published. (Others have praised her for being more inclusive of diverse thought this year.)

I called, emailed, and paid a visit to the women’s studies department at SDSU to request comment. I encountered one associate professor in her office. She declined to comment, and none of the others, including the department chair, responded to provide comment. No fraternity leader or university staff responded to comment either.

A man not afraid to cry

Further east down El Cajon Boulevard, new El Cajon city councilman Phil Ortiz walks a chivalrous path in his pursuit of masculinity. During his interview at the May 14 city council meeting for the council vacancy left by Ben Kalasho’s March 25 resignation, Ortiz was asked how he would be different than Kalasho. Ortiz cast himself as a defender of women, in stark contrast to the sexual predator the seat’s former occupant was alleged to be. Ortiz said he was among the first to speak against Kalasho, and when he was a student at SDSU he helped found FratMANners — Fraternity Men Against Negative Environments and Rape Situations.

From a pool of 22 applicants the council unanimously chose Ortiz to join them. As votes were announced I looked over my shoulder to see him wiping away a tear of joy, a man not afraid to cry. Though the program Ortiz helped found was among those promoting toxic masculinity education at SDSU this year, Ortiz doesn’t use the two words together.

“Maleness is not toxic. It is toxic to manipulate, coerce, bully, or threaten anyone; especially a woman or child. But I wouldn’t define that as ‘toxic masculinity,’ rather ‘immaturity’ or ‘toxic behavior.’

“A good man gives more than he takes, instills trust in others, and handles that trust with care.”